Unique sculptures on campus come from a chance encounter 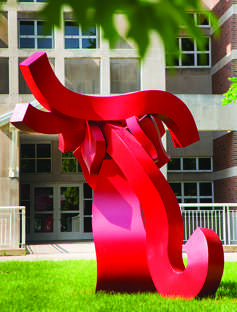 Returning students were in for a slight shock when they saw, what some might call strange, sculptures all over campus. The presence of the sculptures is the result of a chance interaction between President Wilson and Illinois Wesleyan University alumni while in Florida this past spring.

During an alumni dinner, Wilson said that he’d like to see more public art on the Wesleyan campus. As it turned out, some of the alumni were familiar with the Sarasota Season of Sculpture—a biennial art exhibit.

Wilson was intrigued by the idea, and, after a few phone conversations, it became clear that the leaders of the Season of Sculpture shared his interest in the idea. In a short amount of time, Wilson and the school quickly worked out an agreement with Season of Sculpture to host six large-scale displays on campus through May of 2015.

The sculptures, some of seemingly ancient Egyptian descent, are nearly impossible to overlook. Three of them stand over 10 feet tall with their bright colors making a statement amongst the other nature-based adornments on IWU’s campus. Four of these sculptures were designed by New-York based artist Hans Van de Bovenkamp, and the other two were conceived in Boaz Vaadia’s Brooklyn, NY studio.

Some Wesleyan students took a liking to the temporary campus additions, including sophomore Marissa Cozzi. She said, “I actually really like the sculptures. I think they bring a fresh look to the campus, and they also give our campus an aspect that not many others have.”

While interesting and unique, the sculptures haven’t won over the entire student body, including junior Cameron Leberecht. He said, “Frankly, I don’t care for them. I’m happy to see that we’re trying to incorporate more art into the campus setting, but I just don’t think that the majority of these new sculptures fit with the campus setting. The quad acts as an arboretum. That doesn’t seem like a natural pairing for shiny contemporary art. The sculptures themselves look fine, but they just don’t seem to belong.”

Aside from matching the existing campus identity, a concern that has been raised by members of the student body is the issue of financing such an exhibit. A large reason for this concern is the misconception that the funds would come from student tuition funds, or otherwise directly out of Illinois Wesleyan’s pocket.

With donor contributions, the school will not have to pay to feature this exhibit on campus. The leaders of Season of Sculpture agreed to chip in to cover transportation costs, which made this a very enticing opportunity for the school.

“We’re grateful to those who have made it possible to bring the work of these renowned artists to central Illinois,” said Wilson. He and the school also look forward to future opportunities to feature similar works of art on the Wesleyan campus.