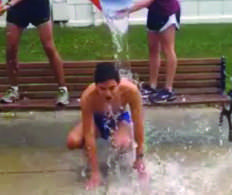 Neighborhood driveways, city streets and social networking cites like Facebook, Twitter and Instagram have been blowing up with people dumping buckets of ice water on their heads this past summer. The Ice Bucket Challenge started in order to raise awareness and funds for Amyotrophic lateral sclerosis (ALS). Children, adults and celebrities alike are joining this social media phenomenon to fight back against a disease that currently has no treatments or cures.

Although this trend has been a huge success for the ALS association, a number of criticisms have arisen relating to the campaign, accusing it of being self-congratulatory— focusing primarily on fun rather than donating money to charity.

Donald Brown, an Illinois Wesleyan University sophomore said, “I believe the challenge is effective if you’re doing it for the right reasons. I feel like some kids accepting the challenge don’t even know what ALS is.”

ALS is a progressive neurodegenerative disease that affects nerve cells in the brain and the spinal cord. The degeneration of motor neurons eventually leads to their death, and once dead, the ability of the brain to initiate and control muscle movement is lost.

With voluntary muscle action progressively affected, patients in the later stages of ALS may become totally paralyzed. According to the ALS Association website, the disease most commonly affects people between the ages of 40 and 70 and an average of 15 people are newly diagnosed with ALS every day.

Numerous celebrities, politicians, athletes and everyday Americans have been posting videos of themselves online and on TV participating in the event. According to The New York Times, more than 1.2 million Facebook videos were shared between June 1 and Aug. 13 and the phenomenon was mentioned more than 2.2 million times on Twitter between July 29 and Aug. 17.

At Illinois Wesleyan University, there has been widespread participation in the challenge. Students, sports teams, Greek life and many more have nominated each other to get iced or to donate to the ALS cause. Even IWU’s esteemed faculty—President Richard Wilson, Provost Jonathan Green and Dean Karla Carney-Hall—responded to the Ice Bucket Challenge immediately following the convocation of the Class of 2018.

Leo Martinez, senior cross-country member at Illinois Wesleyan, took the challenge and donated to ALS. “The challenge is a great way to raise awareness for ALS, but maybe not money. Especially with our generation’s crave for attention on social media,” said Martinez.

America’s participation in the event has raised a tremendous amount of awareness and funds for ALS, especially through social media making the ALS Ice Bucket Challenge a huge success nationwide.