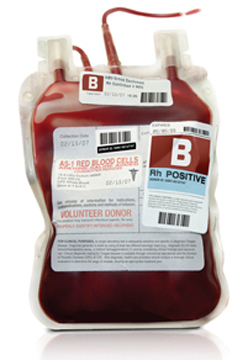 Blood banks around the world are constantly in a short supply of donors, especially in the United States.
Because of that, I have been actively donating blood since I turned 16 and will quickly encourage anyone who is eligible to do the same. They even provide you with a snack and a snappy sticker for your time and bodily fluids.
But a solid amount of my friends are considered unsafe and ineligible to donate because of their sexual orientation and the “risky behavior” that comes along with that.
Every visit to the Red Cross is started by the donor filling out a questionnaire, answering about their general health, travel and lifestyle. This includes whether male donors have had sex with another male even once since 1977.
The stipulation was instituted in 1985 at the height of the AIDS epidemic. At the time, the disease was spreading like wildfire among the gay community, particularly among men and there were no reliable and time-sensitive tests that could determine if a person had HIV.
Thus, the Red Cross and the FDA took the safest precaution of preventing the spread of AIDS and created a stipulation of “lifetime deferral” to what was considered the most likely social group of carriers.
But that guideline in particular is outdated and unjustifiably restrictive with the advancements that have been made in modern health in the past 28 years.
A recent statement by NBC said that the country’s blood supply was the lowest it had been in 15 years.
A 2010 study by the UCLA Williams Institute estimated that if gay men who did not have sexual contact for the past 12 months were allowed to donate blood, more than 53,000 additional men would likely make more than 89,000 blood donations.
This is something that we can’t seem to afford to be missing. Should we have another national disaster on our hands with a high injury rate, a far larger number of lives have the potential to be lost due to insufficient supply of blood.
In 2010, the Red Cross actively pursued a change in their policies. But the FDA, who actually determines the stipulations of donors, blatantly shut down the idea of a change in policy.
There is a lack of evidentiary support for HIV among gay men being a valid medical concern, since all donations are rigorously tested to rule out donors that are infected.
One model that has been drawn up suggested that if the change was approved, it would result in just one additional case of HIV transmitted by transfusion every 32.8 years, which is insignificant as far as the benefits that it could achieve.
The FDA might want to instead consider changing their questionnaire to include a policy about when a donor’s most recent STD test was as well as the results of it.
Policies should reflect an individual’s sexual behavior, not that of an entire interest group. Instead of screening based on outdated stereotypes, the FDA needs to move forward to recognize all donors as individuals who hold the potential to save lives.