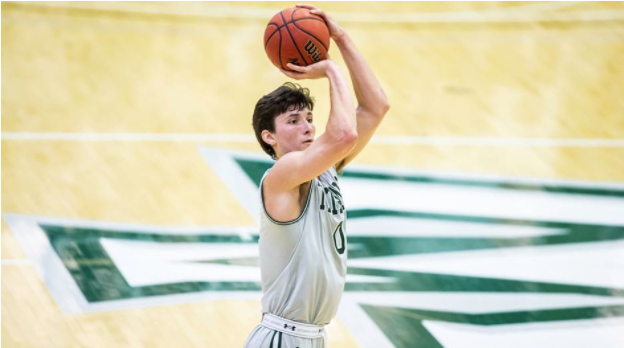 The Illinois Wesleyan men’s basketball team took on the University of Washington on Wednesday, December 1. The Titans entered the court with a record of 5-0 for the season and left with another victory.

The Titans ended the midweek game against UC 83-50. The victory came directly after the women’s basketball team also brought home a wide victory against Eureka.

Junior Luke Yoder opened the game by scoring six of the Titan’s 11-point streak. Thanks to strong shots from the Titans’ offense and heavy defense, UC didn’t get a point on the board until five minutes into the first period.

IWU widened the gap in the lead to 23-7 because of a three-pointer by sophomore Ryan Sroka and a layup from junior Lucas Heflen.

Senior Matthew Leritz added another nine points with Yoder’s assistance. Yoder also added another triple, while senior Cory Noe managed a jump shot. By halftime, the Titans were up 39-15.

The second half proved as successful for the Titans as the first did. Freshman Harrison Wilmsen slammed out a layup off of a pass from junior Landon Wolfe. Wilmsen also scored the and-one from the freethrow line.

The Titans ended up dominating UC with a final score of 83-50 and continuing their season-long winning streak.

Prior to Thanksgiving Break, the Illinois Wesleyan men’s basketball team travelled to Michigan for a pair of non-conference games against Alma College and Calvin University.

Mitchell managed a team-high nine rebounds. Alongside were freshman Nick Roper and Noe, contributing five each.

Strong shooting gave the Titans an early lead and never gave Alma’s offense a chance to make up the difference. The Titans ultimately brought home a 91-74 win.

IWU also managed to cruise to victory against Calvin. Once again, Leritz lived up to his senior captain status when he managed his third double-double of the season with 28 points and 12 rebounds.

The junior duo of Mitchell and Yoder followed close behind with 15 and 11 points, respectively. Mitchell also provided eight rebounds and five assists and Noe added 10 points.

After reaching another early lead, the Titans maintained the gap for the rest of the game. The Knights fell to the Titans 81-72.

The pair of victories caught the attention of both the College Conference of Illinois and Wisconsin and D3hoops.com.

On Monday, November 22, Leritz was awarded CCIW Player of the Week for the second time in his collegiate career. In the same week, Leritz took up a space on the D3hoops.com Team of the Week.

D3hoops.com is a website dedicated to Division III college basketball and releases a weekly fantasy lineup to compile some of the best players of the past week.

Following Noe’s addition to a weekly roster, Leritz is the second Titan this season to receive a spot on the team. This most recent addition also marks the second time in Leritz’s career that he has been recognized by D3hoops.com.

D3hoops.com also maintains a Top-25 poll, which allows 25 coaches, directors and media professionals from across the country to vote for their predicted Division III basketball rankings. The Top-25 results are published weekly.

Thanks to IWU’s current 5-0 record, the Titans received three first-place votes from the panel of voters. The Titans finished directly ahead of Randolph-Macon and UW-Platteville in third and fourth, with Wheaton rounding out the Top-Five.