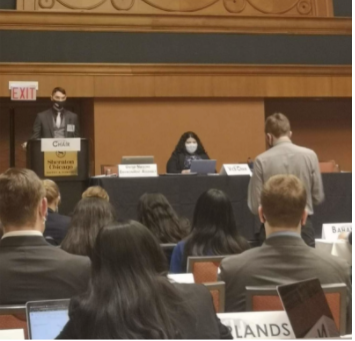 This year, as campus reports fewer cases and students adjust to life in the pandemic era, RSOs are returning to their normal operations. It is not only first years who are seeking organization membership, but also upperclassmen who have missed out the last two years. One RSO that has seen far more activity this year than last is Model United Nations (UN).

According to its RSO page, Model UN is “an experiential way of learning the ways of the United Nations.” Members are assigned to represent a country at the American Model United Nations (AMUN) conference at Sheraton Grand Chicago hotel just before Thanksgiving break. Here, they work alongside students of other universities to discuss global issues and brainstorm solutions via diplomatic resolutions. The conference imitates the actual UN as closely as possible.

AMUN did not host a conference last year  due to the pandemic, so Model UN was practically nonexistent on campus. This year, Model UN members roamed the Windy City and represented Wesleyan and Spain, their assigned country, at AMUN from November 20th through the 23rd.

Each Wesleyan student was assigned a different committee, just like the actual UN. In these committees, students were tasked with resolution-building while accurately pursuing Spain’s interests.

Senior Jonas Maes was assigned to the Fourth Committee, the Committee on Decolonization. “I went to great lengths to reclaim the isle of Gibraltar from Great Britain,” Maes said while representing Spain. Maes worked with other world delegates (students from other universities) to achieve his goal.

Another Model UN member, senior Jared Schneider, was put into the First Committee, the Committee on Disarmament and International Security. With a focus on eliminating existing landmines, Schneider’s committee passed a resolution which “involved the training of rats to search out landmines.”

This creative solution is not abnormal in these conferences. Model UN deals with very real and somber issues, but there are ways in which students make light of the experience and have fun.

Model UN is not all work without any play. While constantly trying to convince others to sign one’s resolution, or rather “hare-brained schemes,” Maes said. Model UN is more fun than it is perceived to be.

AMUN offers great physical social experiences. “You get to meet people from different schools around the country, [but also get to explore] downtown Chicago when you get breaks from the conference,” Schneider said.

Model UN is an organization which seeks to educate students and provide them with experience in real-world problem-solving.

“I learned that despite things being bureaucratic, if you know the rules well enough, you can break them,” sophomore and Model UN member Farah Bassyouni said.

Next year, IWU will be representing South Africa. “It will provide for a variety of opportunities to write interesting resolutions and to take the role of a rather unique government,” Maes said.