Opinion: Duolingo should be downloaded on all platforms 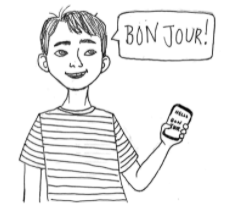 As soon as I found out I was accepted into Illinois Wesleyan’s Spain program last spring, I knew I would need to begin learning Spanish. I took French classes from 7th grade through sophomore year of high school. Although not a regrettable decision, I retained some of the language and enjoyed the classes, but it perhaps would have been better to learn Spanish as it is more predominantly spoken in the United States. But as they say in french: c’est la vie.

As a nursing student, I have limited time to finish doing my general education courses, so I opted to begin learning Spanish online. I chose to get the language app Duolingo, one I knew of from Duo the owl memes on the internet. The app is free, although for either $12.99 a month or $80 a year you can upgrade to Duolingo Plus. I elected to do so for several reasons: I got access to extra languages, no ads and unlimited daily lives, to name a few. The free version of the app gives you access to the “basic” languages like French, Mexican Spanish and German.

Duolingo Plus allowed me to learn Spanish with pronunciation as it is in Spain. I elected to pay the $80, as I figured I had the money and it would give me some basic Spanish language skills before studying abroad. Since I started in May, I have acquired a 201 day streak and have almost finished 2/10 lengthy units. Each unit is a bit different, the first containing topics like phrases, shopping, present tense, and school. I dedicate approximately 10-20 minutes a day to learning Spanish, it is the most I can manage with my ultra busy schedule. But even in giving such little time to the app, it adds up and can be seen in my Spanish skills.

Due to Duolingo, I know how to say and understand restaurant menus, greetings, and how to ask and answer questions. The lessons do not even feel like you are learning. Depending on the type of lesson, I could be playing a matching game, listening to a story or having a pretend conversation.

An additional asset of Duolingo is when you finally feel you have conquered a lesson, you can attempt its various levels of difficulty and move ahead to the next. Even without paying for the plus version, the free version is still great, and even my dad has it. He had wanted to brush up on his Spanish, so I recommended him Duolingo, now he uses it in his free time. Although Duolingo may only be known to some for Duo the Owl memes or its commercials on television, it is truly a great app, free version or plus version alike.