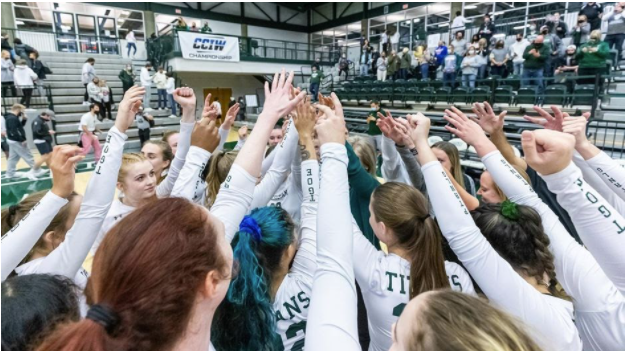 After a season of dominating the College Conference of Illinois and Wisconsin, the Illinois Wesleyan women’s volleyball team ended their season with a loss in the NCAA Tournament on Thursday, November 11.

The Titans in the opening set, as the Eagles flew to an 11-point lead. Senior Dana Kiszkowski managed to hammer out a kill, followed by fellow senior Jessica McCall adding a pair of kills to shave the gap to 21-14.

McCall’s kill forced UNW to call a timeout, but McCall was not ready to slow down.

Together with junior Evy Makris, McCall managed to force another Eagle timeout with a block. Makris slammed a kill of her own to try and pull the Titans up, but the IWU comeback fell short.

The Eagles tipped over match-point and took the first set 25-20.

The teams traded points back and forth before UNW pulled away with another 11-point lead. Senior Courtney McAuliffe managed a kill, only to be followed by a second-ball kill courtesy of freshman Abby Erdman.

McCall capped the streak with a final kill, but an IWU miscue gave Northwestern the set, 25-15.

Early into the third and final set, the Eagles used aces to take a 5-1 lead. The Titans fought back with Corey and McAuliffe providing one and three kills, respectively, to pull forward. The Titans managed to get within one point, 7-6, before temporarily grabbing the lead.

McCall led the Titans, providing aces that put the Titans in the driver’s seat. The senior dynamic duo of Cory and McAuliffe combined for a block before sophomore Lily Summers smashed a kill to put IWU in front, 12-7.

IWU extended its lead to as many as six, but Northwestern soared back into action, tying the score at 24-all.

The Titans and Eagles traded points back and forth once again before UNW edged IWU out and ended the match in a three-set sweep.

McAuliffe led the Titans with 10 kills and McCall added eight kills, 12 digs and a trio of aces. Kiszkowski notched seven kills on a .333 hitting percentage.

Corey contributed a team-high 18 assists, followed by Freshman setter Ava Porada with 14 assists and seven digs. Washko led the Titans in digs, adding 19 of her own.

The Illinois Wesleyan women’s volleyball team rounded out their season with a 19-13 overall record. They also took home the College Conference of Illinois and Wisconsin regular season and tournament titles.