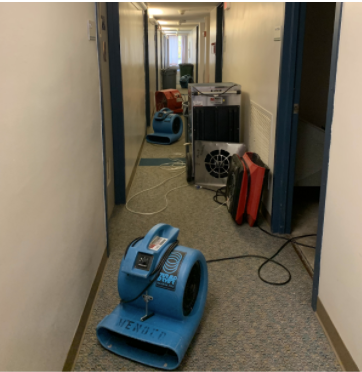 Students come back from class and have to step around the equipment filling the hallways. Photo: Jennie Maue

On November 8, first-year Munsell Hall residents came back to water-logged belongings and flooded floors after a sprinkler was discharged on the third floor. Water rained down onto the dorms after a speaker was hung from the sprinkler.

According to Kyle Griffith, Office of Residential Life director, cleanup after the incident will continue until the structure of the building is dry. Menold Construction and Restoration and Physical Plant were called in on Monday and have been working since.

Rooms were impacted differently based on location, as the rooms that face SAGA didn’t stay as dry as the rooms on the opposite side of the hall.

First-year Natalie Jacocks said that her room, which faces the Main Street parking lot, had damp walls but that other rooms on her floor were “trashed.”

Griffith said that ORL has been in touch with all the affected students and offered assistance and guidance regarding housing and any damage to personal belongings. Affected Munsell residents received emails from ORL that urged them to gather their belongings.

At 5:00 p.m. on Monday, students received an email from area director Janae Brown that offered a “temporary” space for affected residents but did not provide specifics as to where those spaces were. Brown also encouraged residents to spend the night with a friend or family member.

Many residents, however, said that they have been displaced longer than one night. A trip to a Munsell common room provides the view of mattresses on the floor and belongings stacked wherever they can fit.

The environment is surreal, according first-year resident Christina Miller, who came back from class on Monday to disaster.

“It felt surreal in a bad way,” Miller said. She said that her room was humid and hot but that lugging her things into the common room wasn’t worth it.

Griffith said that he hoped that all students understand that fire safety equipment is sensitive and can cause a lot of water damage quickly.

“They hammered it into our heads that we should not hang anything from the sprinklers. I mean, we’re adults. You think people would know,” first-year Henry Evans said.

Griffith’s sentiment was echoed on Tuesday when students received another email from ORL with updates on the clean-up timeline and damage costs. While the total cost is still being added up, ORL encouraged first-years to check their homeowner’s or renter’s insurance policies if they would like to pursue a claim.

“What if we don’t have insurance?” Miller asked.

Many students have taken advantage of the sprinkler’s mid-November timing and gone home early.

“Lots of people are saying they want to leave or already did,” first-year Alyssa Lowder said.

As fans fill the hallways and hoses trail out of dorm rooms, the parking lot has gotten emptier every day. First-year Alex Anders said that mold was discovered in her second-floor room when they looked for damage, and that she is in the process of moving out of Munsell.

Griffith said that if damage from the flood caused undue hardship for students, they could explore the possibility of the Titan Student Emergency Fund.

As of November 11, sleeping students are still a staple in the Munsell common rooms and not because they stayed up too late studying.