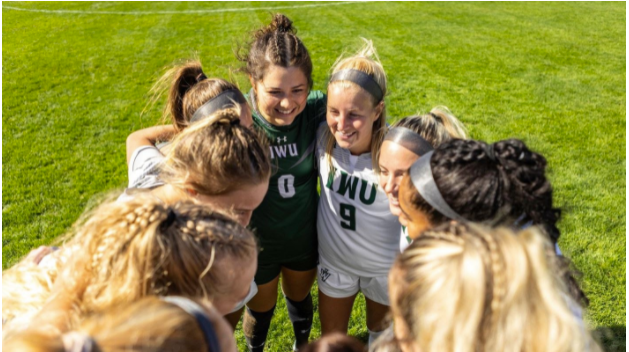 Photo: IWU Sports Seniors Maria Fields (#0) and Caelyn Steffens (#9) celebrate alongside the Titans after their Senior Day victory against Augustana.

Illinois Wesleyan women’s soccer ran up against Augustana College on October 16. After falling behind in the first half, the Titans picked up a 2-1 victory over the Vikings. This Senior Day victory brings IWU to 3-1 for CCIW competition and drops Augie to 3-3 in the CCIW.

In the first 20 minutes, Augustana snagged a goal and brought the score to a 1-0 lead. Defense kept the Vikings back for the remainder of the quarter, boxing Augie out of Titan territory.

Illinois Wesleyan came off of halftime and literally hit the ground running. Senior Erin Peck took advantage of an opening to find the back of the Vikings’ net. Peck brought the score to an even 1-1 less than two minutes into the second half, while senior Maria Fields managed two saves that kept the Vikings from adding any more points.

Following Fields’ defensive work, seniors Izzy Mitra and Caelyn Steffens worked together to pick up a game-winning goal for the Titans.

After taking on the lead, IWU held Augie’s offense steady. The Vikings managed two shots-on-goal in the second half but still didn’t manage to put more points on the board.

To follow up their 2-1 victory against Augustana, the Titans took a brief hiatus from conference play to match up against third-ranked WashU in a non-CCIW weeknight game on Wednesday, October 20.

Led by goalkeeper Fields with five saves in the first half, Titans defense protected the net from 11 attempts by the Bears. WashU managed to break IWU’s barrier 43 minutes into the game and score the only goal of the game.

Freshman Liza Matimore had the opportunity to tie up the game with a free kick 55 minutes in, only to be blocked by the Bears’ goalkeeper.

After halftime, the Bears hoped to double their lead but were thwarted by Titan defense once again.

Senior Madison Fischer made a save for IWU on the goal line and freshman goalkeeper Kayla Borg added a stop to maintain the scores. Senior Heather Dietrich and junior Jenna Li both pushed forward, attempting to put Wesleyan on the board to no avail.

Despite the fight, the matchup ended with a close 1-0.

The Titans will return to action for a CCIW match against Carroll on October 22.