SOTA returns to the stage with “Life’s a Dream” 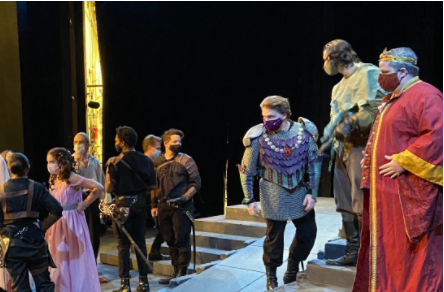 IWU’s School of Theatre Arts (SOTA) will transform living rooms into stages again this semester with their upcoming show “Life’s a Dream.” Directed by SOTA’s Tom Quinn, the show will run virtually from October 22 through October 24.

Quinn and the show’s company performed an English translation of Pedro Calderón’s most famous work, which was published in 1636. The play “Life’s a Dream ” tells the story of a fictional prince, Segismundo, who is imprisoned by his father based on a prophecy that he will terrorize the kingdom and cause the King’s death. Through the self-fulfilling procephy, the play handles themes of free will, identity and reality.

“This is a timeless piece because, particularly as college students, we are learning new things about ourselves and having to grapple with how that fits into our identity every day,” senior Julie Cozette said, who played Rosaura in the production.

Rosaura goes on a quest to win back her honor from her love, torn between duty to her heart and duty to her reputation. Sigismund, the prince of Poland, has been secretly locked away due to a prophecy that he would grow to be a monster. Both must determine if what the world has determined them to be is who they really are.

“From struggling with your identity to wanting your honor respected, this show manages to cover all challenges and joys of being human,” junior and stage manager Hanna Hagerty said.

“Life’s a Dream” was filmed for viewing, as all SOTA shows have been since COVID-19 forced the theatre department to get creative in order to get an audience. When actors and crew rehearsed for a show before, they did it with the knowledge that they would eventually perform their lines to an audience. In order to keep everyone safe, SOTA has been performing to empty seats for a year now. Instead, the actors act for the camera.

“There is a huge stylistic difference between stage and film acting, which has absolutely presented a challenge. Film acting is generally more focused in realism and nuance, while stage must be projected,” Cozette said.

According to Cozette, “Life’s a Dream” is meant to be performed for an audience because the characters are often speaking directly to the people that should be sitting in the seats in front of them. The cast found a way to perform for a small audience during their filming run and gathered around thirty SOTA faculty and students to watch their performance.

“With them in the theater laughing and clapping, it gives more energy to our performance because we are able to respond to them,” senior Alexis Ries said.

Hagerty said that her job as a stage manager didn’t change too much because managing a show for an audience versus a show for film have the same foundation of keeping everything organized and on schedule.

“The only main difference is in the design concept stage. For example, a lighting designer needs to consider how their lighting design will translate to film because it may look beautiful in person but may not come off that way on film,” Hagerty said.

Filming the show was not the only challenge that the “Life’s a Dream” cast faced. The play is complex and full of sword fighting, movement sequences, stage combat, music, and intimacy. Actors like Cozette, who has acted in SOTA shows since her freshman year, noted how much they learned during the production.

“ I learned stage combat with a rapier without any previous experience, worked with an intimacy coordinator, and, of course, had to speak in verse,” Cozette said.

Hagarty added that Cozette wasn’t the only one who noticed how many new experiences on the stage.

“From an educational standpoint, the students involved in this show got a bunch of new experiences. Working with a intimacy director, learning sword fighting and stage combat, incorporating movement sequences