Titans go back in time at capsule opening 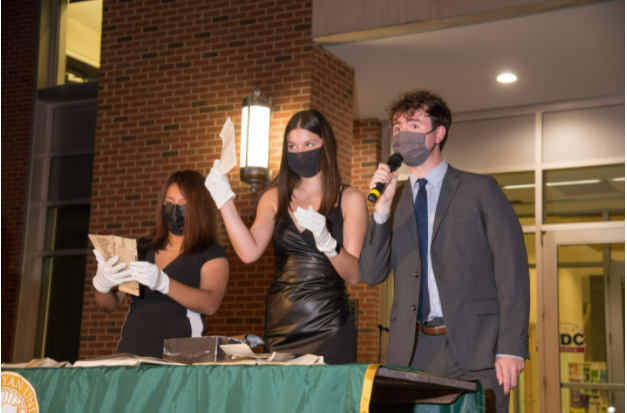 Caption: Student senate presents the contents of the capsule.

Homecoming attendees got a blast from the past this weekend as they watched the opening of a 100-year-old campus time capsule on Friday, October 1. It was placed in the Memorial Gym, which is now Hansen Student Center, during the 1921 Homecoming events and unveiled after a century by IWU’s Student Senate members.

The capsule’s contents were revealed in honor of the original Memorial Gym, as well as twenty years of Hansen Student Center after it was remodeled and reopened in 2002 to serve as a student hub.

Everything is currently on display in Hansen. The exhibit will be relocated on October 11 and the contents will stay in the archives as part of the historical record for the building.

A group called the “Athletic Committee” organized the capsule in 1921 and stuffed it with artifacts of the time, which mainly included copies of news relevant to the time. There were several copies of newspapers, including The Argus, but many of the papers in the capsule were religious bulletins, such as The Christian Advocate, or were focused on the Methodist Episcopal Church. IWU had ties with the Methodist Church in that time, which also accounts for the Bible and Methodist Episcopal Church yearbook also tucked into the capsule.

Among the contents, there was also an issue of The Pantagraph with the headline “ County Raises $715,199 for Wesleyan” and a damaged photo of the 1921 Titan Football team.

The capsule, according to the November 1921 Argus, was created to show a new vision for IWU. President Theodore Kemp wanted to immortalize the beginning of a “Greater Wesleyan.”

Friday’s time capsule is one of at least eleven on campus that IWU’s archivist Meg Miner is aware of.  That number includes four that have been removed. Two were removed when the buildings were demolished (Hedding Hall in 1969 and Sheean Library in 2011) and two for anniversaries (Evans Observatory in 2019 and now Hansen).

Miner is excited to dig into the artifacts as soon as the exhibit in Hansen is moved to the archives. She said that the photo of the football team and The Pantagraph headline were especially interesting to her. 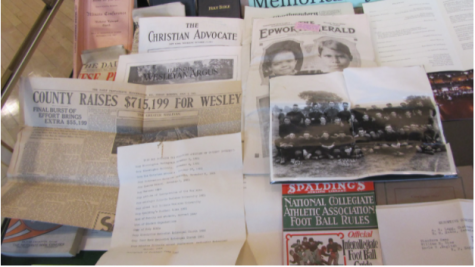 “Even though it’s cracked at the folds the photo is quite clear. Students in those early days always seem to look older than students of today,” Miner said.

IWU was having some financial problems at the time of the capsule’s construction and the University wanted to grow to accommodate more students but didn’t have the purchasing power needed to do so. The Pantagraph’s headline spotlights the Bloomington-Normal community’s huge donation to the campus.

“The Pantagraph, and I am sure some of the other papers, reveal connections with the community and issues going on in that time so those will be interesting to explore. And in this case, the Pantagraph carries a clear statement of the University’s importance to people,” Miner said.

Older students may remember the opening of a different capsule in 2019, which had been tucked away for fifty years, but this capsule’s insides were in far better condition. Many of the contents that came out of the box in 2019 were in rough condition because of some food and a deteriorated battery. Last week’s reveal, to Miner’s delight, didn’t contain any 100-year-old snacks.

Some students and faculty made predictions to Miner before the event on Friday about the contents and only two guesses, both about newspapers, were correct. Though a few students did guess that the last capsule’s unfortunate food containment would be repeated.

With at least seven more time capsules hidden away on campus, Miner’s interest in the contents stays piqued because of what each capsule reveals about IWU at the time of time capsules’ creations.

“Artifacts have the power to evoke other times and connect people to events that they would not think about. Or at least that they wouldn’t have close connections with,” Miner said.