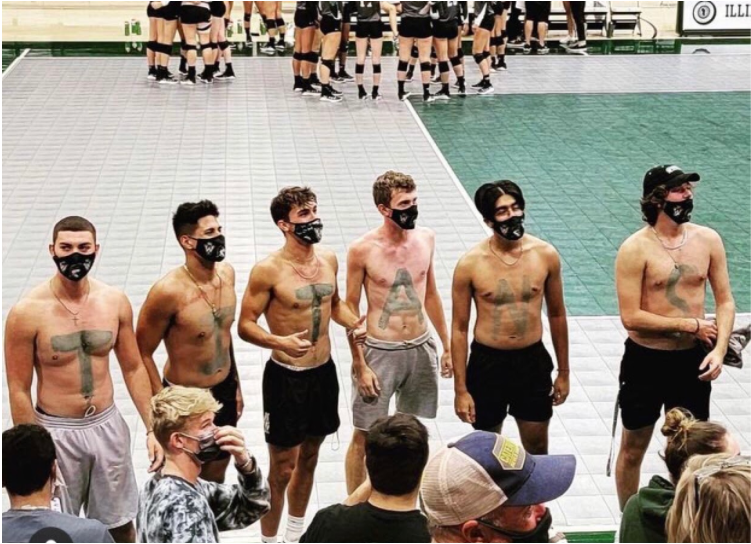 IWU Women’s Volleyball starts their 2021 season off strong with a three-set sweep, but not without the support of IWU Men’s Volleyball in the crowd! Photo: Kevin Johnson

In their first game of the 2021 season, the women’s volleyball team (1-0) dominated Illinois College at home with a three-set sweep on September 1. Their steady offensive moves and consistent work lead them to final sets of 25-20, 25-14 and 25-17.

Leading the pack were seniors Courtney McAuliffe and Jessica McCall, both sporting more than ten kills and 0.47 attacking percentages. McAuliffe reached the match-high with a whopping 12 kills. Alongside them was junior Grace Sanders, also ending the game with double-digit kills.

Guiding the defense was senior Makenna Jacoby with 11 sprawling digs. Jacoby’s 11 was the match-high but she was followed closely by Sanders and seniors Amber Juarez and Madi Corey, who all contributed 10 digs each.

“We’re really excited about how the match went tonight. The sweep was awesome but being able to be back in the Shirk Center with fans was amazing. We had a great turnout and can’t wait for the rest of the season,” Sanders said after the match.

Assisting in this triumph was Corey with a match-high of 19 assists and freshmen Ava Porada and Abby Erdman. Porada and Erdman ended the match with ten and nine assists respectively, proudly helping the team to victory in their first match with Illinois Wesleyan.

“The energy during the match was electric. After a long year without much excitement, it was awesome to be a part of the athletic community again,” said spectator and junior Mirela Toncheva.

It seems like just about everyone is psyched to be back in action.

“Huge shoutout to the men’s volleyball team: we’ve never had shirtless fans before,” Sanders said, referring to the IWU men’s team who helped stir up the crowd (Pictured).

The women’s volleyball team will next travel to Newport News, VA to face off against Lynchburg, Susquehanna, Clarkson, and CNU from Friday, September 3 to Saturday, September 4 in the Captain’s Classic tournament hosted by Christopher Newport.