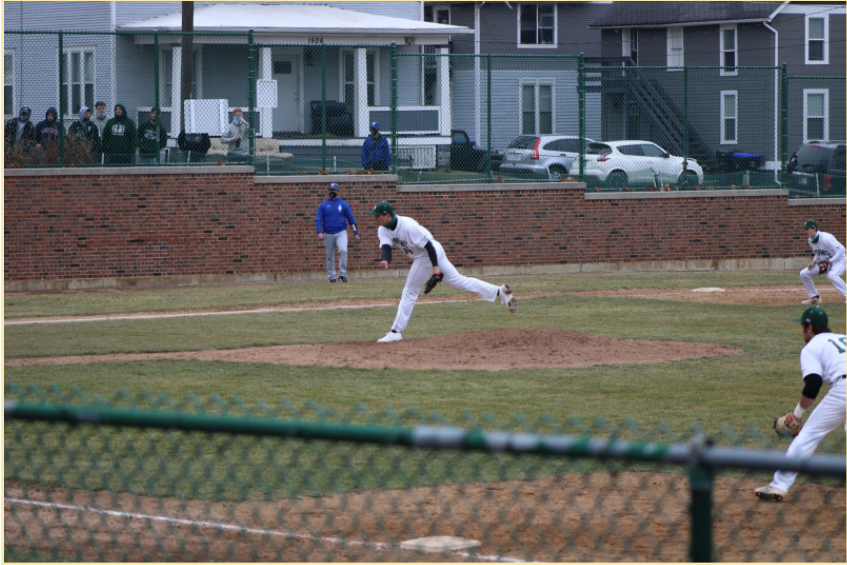 The Titans opened their first full conference series by splitting the weekend double header at home winning the first game 10-3 and losing the second game 5-9. This set up the rubber match for this past Tuesday March 23.

IWU was victorious in this third game 4-1 after a dominating performance on the mound from senior Quinn Guidaitis. Guidaitis pitched a complete game, struck out 14 and only allowed 3 hits. This recent performance earned Guidaitis the honor of CCIW pitcher of the week.

“After about the 3rd inning I knew my off-speed and tempo was working well because I started missing their bats and really piling on the strikeouts,” Guidaitis said.

Offensively, the team was led by juniors Evan Ranneklev who went 2-4 and scored 2 runs while Jared Mutter went 3-4 and scored 1 run.

“We need to trust ourselves and have confidence in ourselves even if we hit a slump. We have a great team here with a lot of senior leadership that can really help push us through the slumps to succeed in the end,” Mutter said.

The team is now 7-5 overall with a 2-2 record in the conference after losing their first game to North Park and winning the Elmhurst series.

The double header had a strong offensive performance from junior Jack Schneider who went 3-5 as well as sophomore Ethan Burgh who went 2-3 with 3 RBI’s and 2 runs scored.

“We need to work on eliminating free 90’s (hit by pitch and walks) and put the ball in play as hitters to put pressure on the other team,” senior Eric Bennes said.

First-year Jacob Cyrus continued his offensive domination from the previous week where he earned the title of National Collegiate Writers Baseball Association (NCWBA) rookie of the week after going 6-8 with 10 RBI’s in a double header against Wartburg College March 13.

“If we limit mistakes on our end we should be able to bounce back from slumps and be more successful as a team,” Guidaitis said.

While the team fell short in game two of the double header 5-9 it was not without a strong effort from Bennes who pitched 3.2 innings while striking out 8 in relief.

“What has helped me so much is practice, baseball is a game of adjustments and being able to listen to our coaching staff and fellow pitchers has helped improve my game instrumentally,” Bennes said.

The Titans will head to Wheaton for a Saturday double header on March 27 and then to North Central on Tuesday March 30 for a mid-week game.