Palestinians are more than what happened to us 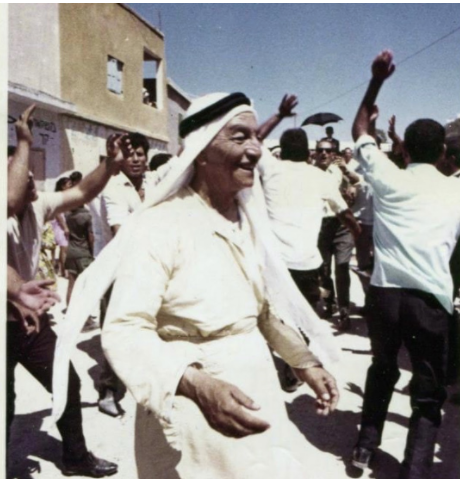 My great grandfather dances at a Palestinan celebration in my father’s hometown of Umm El Fahem. Photo Courtesy of Samira Kassem

Of all things, a UFC fight this past weekend really made me sit back and reflect on what it means to be Palestinian.

I have never been a fan of UFC fighting and the only time I had ever seen it was when my boyfriend was watching a fight. This weekend, however, I was counting down the hours to the headline Saturday fight.

Why? His name is Belal Muhammad.

Muhammad is a Palestinian fighter who, although he was ranked No. 13, took a fight with the No. 3 seed. He is the first ever Palestinan to headline a UFC fightnight and for a fighter’s career, a headline is a huge deal.

Muhammad was born to Palestinian parents and raised in the U.S. just like me, but chooses to wear the Palestinian flag when he fights. He even uses the iconic Palestinan banger Dammi Falastini (translation: ‘my blood is Palestinian) as his walkout song.

There is a stereotype about Palestinians that they are obsessed with being from Palestine and never stop bringing it up. It is not uncommon for a Palestinian to get excited over something simply because there is another Palestinian involved in it. But, it was this specific fight that made me really reflect on why it is that I was so excited.

As someone whose parents come from two different cultures, identity has always been something that I have struggled with. Since my dad was actually born in occupied Palestine, I do feel a strong connection to my Palestinian roots. But that is just the thing, my dad was born in OCCUPIED Palestine.

We as a people do not even have a place to go back to. If we are lucky enough to return, we are faced with the reality of what has been done to our land and to our people since Israel took over in 1948. We don’t get to see where our ancestors grew up because it has been stolen. We don’t get to walk the streets without seeing an occupier’s flag flying in place of ours and we don’t get to openly enjoy our beautiful culture.

Saying that I am Palestinian often results in hard and emotional conversations that I never invited but am forced into simply because of the nature of what my people are going through. What I want people to understand is that we are so much more than what has happened to us.

People often ask about the occupation but not about our rich culture, our delicious food or our fresh-pressed olive oil that is to die for. They want to know about the houses that we lost rather than about beautiful art we have created for the world or our brothers and sisters who are achieving incredible things.

The thing about being Palestinian is that even those who support us often see us through a lens of our oppression. Even murals that are meant to celebrate us tend to come from an angle of our strength in the face of adversity rather than all that we have contributed to the world.

We have been through and continue to go through so much but why should that take away our ability to be seen as a people with a culture and abilities to share with the world?

The reason the UFC fight made me feel so much joy was because it was a Palestinian being celebrated for their achievements and not just through the lens of our oppression.

I make a point to teach people and have hard conversations about what has been done to us and all that we have lost but never realized how much I wished that I could share all of the positives of being Palestinian more often.

When I watched Muhammad walk out to a cheerful Palestinan song and wave our beautiful Palestinan flag I felt a sense of pride in my people and my culture that is completely independent of the struggle that we have faced.

I am not just proud to be Palestinian because we are strong and show adversity during struggle.

We are so much more than our oppression and, just like any other culture, Palestinians deserve to feel pride and celebrate their people and culture without being reminded of the struggles that we face.