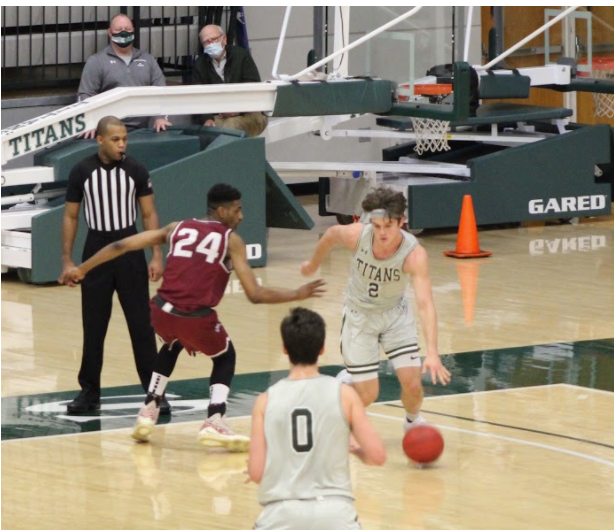 The Titans ended their shortened season winning the final game of the Collegiate Conference of Illinois and Wisconsin (CCIW) tournament 71-58 against No. 3 ranked Wheaton College.

“There were points in time where we went nearly two weeks without playing a game in January and February,” junior Pete Lambesis said.

“We only played six of our scheduled 13 regular-season games due to circumstances out of our control, yet this team remained positive and continued to work hard,” head coach Ron Rose said.

The Titans then faced Elmhurst in the semi-finals, where they were victorious in a dominant 75-65 performance. This win sent them to the tournament championship at Wheaton.

The title-earning win was led by junior Matt Leritz, who had 17 points, 8 rebounds and 1 block. Leritz was followed closely by fellow junior Lambesis who had 16 points, 4 rebounds and 3 steals.

“Our team has a unique dynamic from the freshmen to the seniors everyone hangs out together. A lot of times you find teams where there is a drop off in chemistry between classes, which can affect on-court chemistry. I’d say our driving force was definitely the “buy-in” mindset that everyone had since day one,” Lambesis said.

At halftime of the championship game, the Titans led by just a small margin, 28-27. They then went on a scoring spree to outscore the Wheaton Thunder 43-31 in the second half, ultimatley earning them the CCIW championship title.

“Every single player on this team truly loves to play basketball, and that is a rare trait among college basketball teams. Everyone does their part both in the offseason and during the season to get better, and it paid off,” Leritz said.

Bair had 10 points with 6 rebounds while Wallen recorded 11 points and 2 rebounds in the conference championship game.

Along with Bair and Wallen, the team will be losing seniors Grant Wolfe and Colin Cheaney.

“We will miss this year’s senior class as they provided terrific leadership and helped continue a culture of high standards. With the number of returning players we have high expectations for next year,” Rose said.

It will be a little over six months before the Titans will take the court again.