Women’s volleyball is back in action 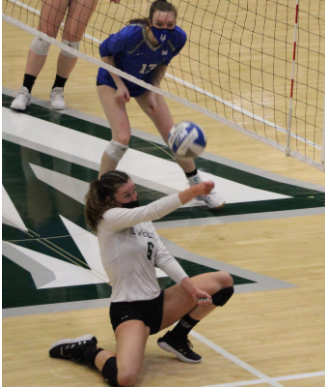 After five months of postponement, the women’s volleyball team was finally back in action on March 3 against Wheaton College. With the cancellation of all winter sport national championship tournaments, the team is only competing within the CCIW and will end the season with a CCIW tournament as well as the 2021 American Volleyball Coaches Association (AVCA) Division III Women’s Invitational Tournament.

“I’m proud of each of our team members. There have been so many “what-if’s” and potential scenarios since this summer but they have still stayed engaged and motivated,” head coach Kim Nelson-Brown said.

This victory against Wheaton was led by a strong team performance as they outplayed Wheaton in 4 categories. IWU won in total points 57-35. IWU won in kills 46-28. The Titans won total assists 45-28 as well as tied in digs 48-48.

“I am trying to make the most of the moment because the season can end at any time. Our team has written out statements about why we play and I think that serves as a reminder and keeps us focused on our individual goals,” McCall said.

Junior Madi Corey led the team with 3 aces followed again by McCall with 2. Corey also led the team in assists with a match-high of 21.

“I believe we stayed competitive by continuing to train throughout quarantine and these uncertain times. We came into the gym at the beginning of February ready to work and really stayed focused ever since, our motto is ‘get 1 percent better every day’,” Corey said.

“Despite the possibility of not having a season this spring the team has continued to stay motivated throughout our shortened season. We have big and attainable goals that we will continue to strive towards this spring and going into this fall,” assistant coach Tyler Brown said.

“The biggest challenge is keeping everyone healthy. You can do everything correctly, but still have a game canceled due to your opponent and the exposure they had within their program. ” Nelson-Brown said.

IWU has only 7 scheduled games compared to their normal 22 game season so each one will hold more weight in regards to CCIW standings. For their next competition, the team will play Carthage College at Carthage on March 17.