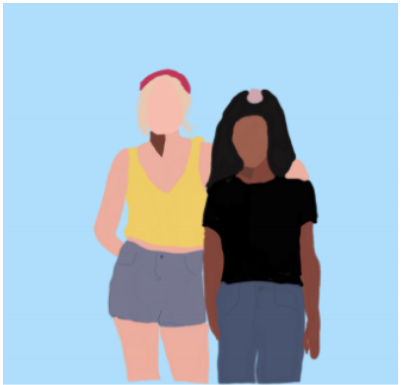 Ginny and Georgia was released in 2020 and currently has a 67 percent on Rotten Tomatoes. Illustration: Isabel Sperry

The new Netflix show Ginny and Georgia combines family and friends with a murder mystery through a slew of characters and intense stories to share in hour long episodes. The show mainly focuses on the mother-daughter relationship between Ginny, played by Antoni Gentry, and her mother Georgia, played by Brianne Howey.

Ginny and Georgia utilizes the dynamics created by a main character moving to a new town. Ginny and her friend group’s storyline focuses on love interests, having best friends and highschool parties. Ginny’s plotline is juxtaposed by Georgia and her circle focuses on parenting and the mayoral election.

In the show, Ginny and Georgia’s relationship can become heavy which causes some scenes to feel almost nerve-wracking to the viewer. The stress Ginny places on situations truly translates through the screen. Georgia’s risky games have you constantly wondering what’s going to happen with her and her kids.

When Ginny and Georgia’s lives would be too stressful, the show would gracefully switch to another character’s life in order to distract the viewers. Maxine, Ginny’s new best friend, is a part of the LGBTQ+ community. The main point of her story is having to navigate love in a way none of her friends understand and her dream role in the school musical. Marcus, Ginny’s love interest and Maxine’s twin, is another character whose shoes the show places us into by giving us his story through his eyes.

While the show is relevant to its demographic and has a more interesting plot than other Netflix originals, it still has moments that feel too sloppy. Some pop culture references and jokes seem so unnatural and awkward. The writers are currently facing some backlash from Taylor Swift, because a poor joke loosely uses Swift’s past dating life as the punchline.

Another flaw to the show is that some events that happen border on unbelievable. With Georgia’s past and present being so hectic and criminal you have to wonder how she has not been caught with anything.

Georgia, throughout every episode, has flashbacks to when she was 15 when Ginny was just born. These flashbacks do give the viewers more background on why Georgia is the way that she is but sometimes they felt too dramatic.

Another aspect of the show that felt overlooked was Ginny’s younger brother, Austin. While the nine year old boy had solo scenes, his character did not grow or develop in any way. The show could have talked about more of Austin’s past and family. His actions were not truly explainable because of the lack of backstory provided.

Ginny is clearly the star of the show and the main character. The writers focus a lot of the plot on Ginny’s life and navigating sophomore year. They added just enough relatability with college applications, school stress and having a cruch on her best friend’s twin brother.

This show would not be something I would normally watch, yet I thoroughly enjoyed Ginny and Georgia, so much that I watched all 10 episodes in two days. The show meshes together a coming of age story with friends in highschool as well as a murder mystery and a criminal past. Overall I would rate season one of Ginny and Georgia a three out of five stars.