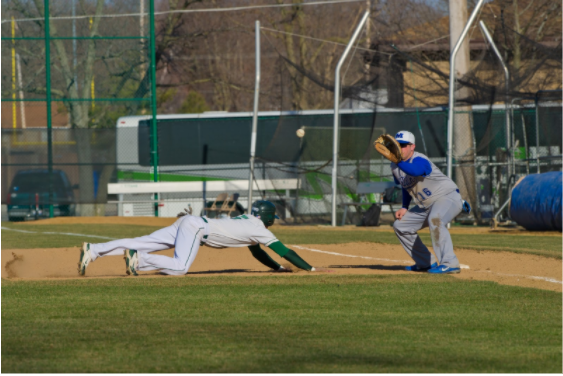 IWU player diving back into the base against Millikin Photo: Illinois Wesleyan

After nearly a year-long break from competition due to COVID-19, the bats for the offense of the Illinois Wesleyan baseball team did not take a break.

IWU won the opening series 3-0 against Greenville University. The Titans slaughter-ruled Greenville in all three games.

“I think we need to keep the positive atmosphere we have created as a team. When you have fun playing baseball as a team winning will follow,” junior Evan Ranneklev said.

The first game ended 12-1 after eight innings and a scoreless appearance by senior Quinn Guidaitis. Guidaitis’s first win of the year was propelled by his ten strikeouts, which earned him a spot on the D3Baseball team of the week. The second win ended 14-2 after eight innings.

“I made a couple of mechanical changes along the way, but the most significant thing was thinking about what we could have been last year. If last year taught us anything, it is that nothing is given. I came out with a completely different appreciation for the game this year, Guidaitis said.

Along with Guidaitis, Ranneklev also earned the honor of being named to the D3Baseball team of the week after his February 27 performance of going eight for ten in the first doubleheader of the year. With his eight hits, Ranneklev had two RBI’s and four runs scored.

“It was great to be back on the field to compete after such a shortened spring season. This offseason, I wanted to focus on the basics and simplify hitting as much as possible, and that helped me barrel up the baseball,” Ranneklev said.

“This was not the level of competition we will be facing in CCIW but it was a solid test after a year off of playing games, we have some challenging games ahead with WashU and then conference,” senior Colin Pfotenhauer said.

“Right now, we are firing on all cylinders, and we’re eventually going to hit some rough patches. How we bounce back from these rough patches will show how great this team is,” Guidaitis said.

The doubleheader’s momentum carried into the Tuesday game, where the Titans again slaughter-ruled Greenville 11-0 after seven innings, another offensive explosion by the Titans. They also won the hit category again, twelve hits to Greenville’s two.

“The biggest challenge for the team would probably be facing the adversity that may come with the virus still hanging around. We need to be disciplined on and off the field by following the protocols in place to stay healthy and avoid an outbreak on the team,” senior Hunter Simon said.

IWU will head to Washington University in St. Louis for a three-game series taking place on March 5 and 6. WashU has won the series the last 3 years they have played. CCIW conference play will begin on March 16 against North Park.