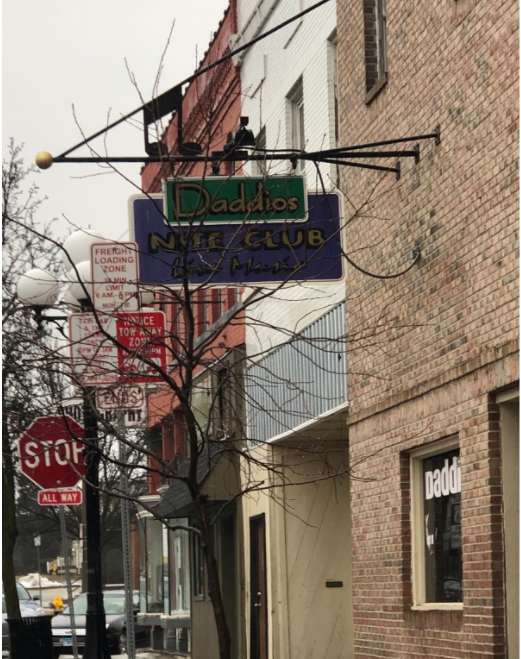 Several shots were fired around 12:45 a.m. on the 500 block of North Main Street just outside of Daddios Nite Club and Kilarny’s Pub, both bars that are frequented by IWU students.

Another female victim remains in critical condition with similar wounds.

Police arrested 41-year-old Michael Bakana, Normal, who has been charged with first degree murder and aggravated discharge of a firearm.

Bloomington police Sgt. Ty Carlton reports that the incident was isolated and was a result of an argument between the suspect and victims inside of Daddio’s Nite Club earlier in the night.

Although he was not present the night of the shooting, junior Cole Paraday often frequents downtown bars.

“The level of safety is uncertain at this point. This shooting goes to show that the security measures downtown need to be adjusted” Paraday said.

Other students cite another shooting in the same general area on January 25 that left one injured and an incident from early October where a man was struck with a hatchet on the 400 block of North Main Street.

“Unfortunately, these types of events seem to be strung together.  However, they are separated incidents. I don’t believe citizens need to be alarmed, but they should always be aware of their surroundings” Carlton said.

Following an increase in violence downtown, the Bloomington Police Department has hired back four new officers and has plans to have four to six officers patrolling the downtown area on Thursday-Saturday nights when students are most likely to be there.

“Unfortunately, shootings like this can not be predicted and criminals don’t follow the law when it comes to legally possessing a firearm.  However, the Bloomington Police Department has always strived to reduce the fear of crime in this area with the Downtown Hireback Detail” Carlton said.

“Each incident is alarming for people, but statistically violent crimes like this are not prominent in the downtown area.”

The bars have been reopened for around two weeks now following a decrease in the region’s COVID-19 cases.

Carlton notes that restrictions led to less people being downtown when the shooting took place than there might have been on a Saturday before the pandemic.

However, Daddio’s and Kilarny’s still were relatively full of young people out with their friends.

“I and my officers communicated with bar staff to keep patrons inside and, if they had to leave, send them out the back exits, which are on the opposite side of where the shooting took place.  This assisted greatly in rendering aid, completing our investigation, and then returning the downtown area to somewhat normalcy” Carlton said.

Despite the university’s Titan Pledge urging them not to, many students have continued to go downtown when the bars are allowed to be open.

“I worry that this increase in violence will cause students to stop going downtown and an increase in house parties on campus will increase the spread of COVID-19 among students” an anonymous sophomore student said.

Senior Evan Nieslawski, however, is not convinced that much will change.

“If i’m being honest I think college students have such an immense fascination with the bars that the recent outbreaks of violence downtown won’t have a massive effect on the turnout on the weekends. Although it may have a slight effect on those that have been more directly affected, college kids are somewhat blinded by alcohol and the possibility of meeting someone” Nieslawski said.

Petracca’s murder is the first of the year and it comes after gun seizures in Bloomington were at a record high in 2020.

This map shows that, at the time that this was written, there had been four shootings in Bloomington so far in 2021, two of which were near the downtown area.