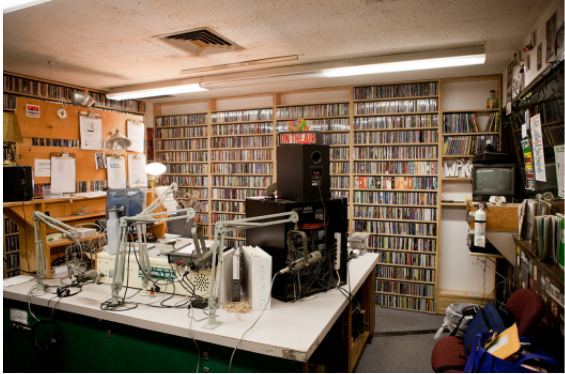 WESN 88.1 FM began at IWU in the early 1970s and provided a variety of programming but student interest waned in recent years.WESN once boasted live student programming 20 hours a day, seven days a week as well as the only Spanish language radio broadcast in Bloomington-Normal. Historically, the station was exclusively run by students.

“One issue we uncovered when investigating the drop in student interest was the lack of consistent management for the radio station,” Tony Bankston said.

Bankston shared that someone outside of the campus community reached out to the station after noticing that primarily programmed music was being played.

“When we looked into it, we found that student involvement was very minimal if not non-existent, so that started discussions about how we might go about reinvigorating both station programming as well as campus community involvement.”

Bankston then teamed up with Derek Bohlmann, the radio voice of campus athletics, and media company D-Rock Media to begin the transition into consistent programming and management.

“ As a public radio station, we are permitted to utilize sponsorships as a means to fund the station. Derek can provide consistent management for the station from year to year and will also work with students who would like to gain some management experience in media,” Bankston said.

As technology changed and streaming services became the norm, the radio station became less of a presence on campus. In its resurgence, WESN plans to entertain not only music but podcast or radio formats as well which has resulted in about 40 students reaching out to Bankston with ideas.

During the fall, Bankston and Bohlmann worked together to make some equipment upgrades that will help run the station and log music as well as some renovation of the physical space. The station is located in the basement of Kemp Hall, a dorm that is marketed to domestic and international upper-division students.

To gauge listening activity, Bankston admitted, will be difficult.

“We hope to hear more about WESN in the Bloomington/Normal community. That may in turn lead to more sponsorships that help fund the station. WESN is also streamed and can be listened to by anyone with access to the internet, so we can promote the station to alum and friends anywhere in the world,” Bankston said.

The radio station, Bankston hopes, will provide students with the opportunity to bring that style of entertainment or information to the IWU and Bloomington/Normal community via WESN as well as be a tool for campus organizations to promote causes and events or connect with the Bloomington-Normal community.

“The pandemic has created a challenge in getting things going, but we hope to see WESN at the RSO fair every fall to continually create new student interest. We also hope to hear WESN playing in different public spaces around campus,” Bankston said.