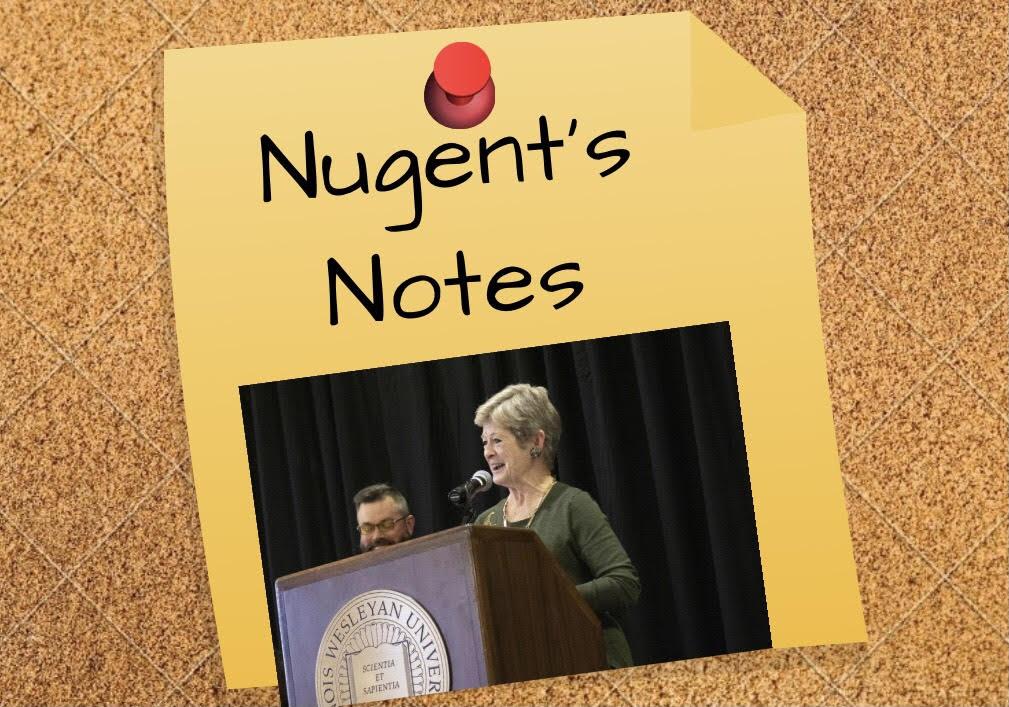 On Monday, Nov. 9, Argus editors spoke with current Illinois Wesleyan president Georgia S. Nugent to reflect on the IWU’s on-campus semester during a pandemic, the experience of POC (persons of color) students on campus and the AAUP’s ongoing investigation of the University.

IWU has employed initiatives such as the “Titan Pledge”  to encourage students to follow state regulations regarding the virus. As of November 12, IWU sat at 164 cases total since students arrived on campus in mid-August.

University of Illinois has required regular on-campus testing of their students this semester. Is that something that IWU is considering going forward?

“Obviously, we have been keeping an eye on U of I. We’re hoping that it works out and there is something widely accessible like their saliva tests in the future.”

IWU currently does their testing at Reditus Labs who, according to Nugent, may consider lowering the cost of testing if insurance companies do become stricter on their coverage. Nugent also spoke about Pfizer’s recent announcement that a 90% effective COVID-19 vaccine from their labs has been developed. Because there are no details about when the vaccine will be completed and distributed, the University has not made any policies about a vaccine yet.

What are the University’s plans for spring semester and spring break?

“From the upward trend we’ve seen in the last two weeks, this is not going to go away by spring. So I guess I would say we don’t consider [IWU’s decision to cancel spring break] premature. We were pretty certain that it would not be wise for our students to be traveling who knows where and then traveling back to campus. With what happens in the Spring, we have no way to know what will happen and how [Governor] Pritzker will treat another shutdown. So all bets are off.”

Does the University have a plan, currently, or going forward, in regards to making sure students of color feel safe on campus?

“This is really a top priority for me. This university has been working at trying to be both more diverse and more inclusive and supportive for a number of years but I feel that we have really come to a moment, in our national history and the history of our University, where we have to be much more action oriented than we have been in the past. We have lots of data and reports and good intentions, but I know that many of our students are tired of good intentions. They want to see action.”

“I see two aspects here. One thing we need to do is have a more diverse community. If you come here, and you feel totally alone, that’s not a good situation. Numbers matter. That’s one side. But the other side of the issue is that we certainly don’t want there to be any aspect of tokenism. That’s where I want to put my efforts. So beginning last year, I reached out to every department that was searching for new faculty members, and made it clear that a more diverse faculty was my first priority for them. And of five new members, four are faculty of color. We also have joined an organization that allows to bring more scholars of color to campus when we need to fill positions. We are also looking at ways to improve our recruitment and the ways we offer financial aid. We need to change our practices if we want a new result. We want to be a home for students of color. We are also, and this isn’t final, planning on entering into a consulting contract with some folks that can help me identify what actions we can take to make a difference on campus.”

“We are also planning to re-found the Center for Human Rights and Social Justice out of the Education department. We want to make that a much more active and visible thing on campus.”

Nugent said she also has plans to meet with RSOs on campus to speak about their experiences as she has been mainly focusing on meetings with individual students at this time as well as meeting with the Alliance, which is a group of faculty of color. She said that she hopes to send the message out “loud and clear” that she wants to move the University forward through the building of relationships and allyship.

In May, an email came from the administration about the killing of George Floyd that did not use the phrase “Black lives matter.” Were there regrets about this and what is the next step in rectifying the anger from students about this?

“I feel that we are in a moment of such polarization and distrust in our country that we have come to put so much weight on specific words in a specific order. I recognize now that that’s very important and I would never have not said ‘Black lives matter,’ and I now understand that there are many people to which that exact phrase is important. I wrote two columns for the alumni magazine about this and I think both of them are very clear about what the University needs to do and that this is a time of reckoning that is long overdue. There have been unequal opportunities for a very long time and we all need to be aware of that and to act on it. Whether we use a particular set of words to say that, to me, is less important than if we care about it in our hearts and act on it but I don’t know why I didn’t say it. I guess I felt I was expressing the same thing but in different words. But, now, I have no hesitation about saying [“Black lives matter”] and it’s displayed on my lawn. Although, people keep stealing the sign. But we keep replacing it.”

IWU came under fire over the summer over the subject of liberal arts’ place on campus. At the recommendation of IWU’s board of trustees, the University elected to send pre-termination notices to over twenty tenured faculty members in the departments such as Anthropology, Philosophy, Religion, Sociology, the School of Music, and multiple language departments.

After notices were sent out and departments began to be reviewed, a complaint was filed with the American Association of University Professors (AAUP) who have since begun an investigation of the University. Gatherings of students, faculty and alumni supporting liberal IWU were held over the summer and the beginning of the semester.

How does the administration respond to the AAUP investigation?

“We were notified that someone lodged a complaint with the AAUP and the organization contacted us to let us know a list of three places where the administration had not followed prescribed guidelines. We believe that we tried very carefully to prescribe to the guidelines. We received their complaint and we wrote a very detailed response explaining why we have a different view and, since then, we have heard nothing. Here is a body that is raising a concern and we are responding as well as we can to that concern. What we got back was that our account had been sent back to the original complainant and, since then, we have not heard from the AAUP. As you know, there are other organizations being investigated and I contacted the presidents of those schools who confirmed that they also have heard nothing.”

“There is being censured by the AAUP and then there is being sanctioned which is a lesser offense. The notice that we received from the AAUP is that we are being considered for sanction. What happens with being sanctioned is that you go on a list and it is published in their internal magazine. I anticipate that at some point that at some point they will get back in touch with us. I think that they operate as ‘guilty until proven innocent.’”

What are your thoughts on claims that IWU is stepping away from liberal arts?

“I know that there is a lot of misinformation [about IWU’s liberal arts] and lack of clarity and I guess I would want to emphasize there that the only objective has been to try to take actions that we believe need to be taken so that the University will remain a place that students want to come because it offers what students want. There’s been a claim that we are stepping back from our mission— absolutely not. Remember that more than 90% of the trustees are alumni and they love this kind of education. They’re giving their time and their money and their effort because they care about Illinois Wesleyan. So it’s unfortunate that there has been some thought that they are out to do something bad to the University. The opposite is the case.”

“I do hope that, despite all the complexity and the difficulty of the COVID era, I hope that by and large, students have had a good experience this semester. My perception is that students wanted to be back and are glad to be back. That was my major concern.”