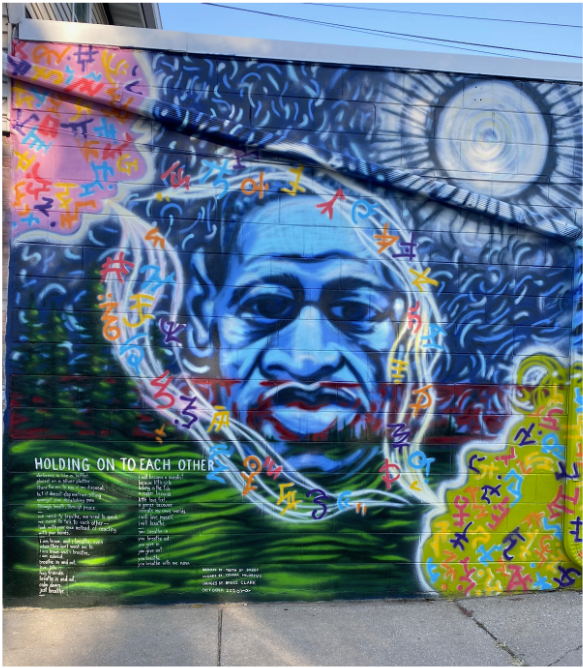 The mural is located in downtown Bloomington at the corner of Washington and Allin by the West Bloomington Revitalization Project (WBRP). Photo: Yovana Milsosevic via Facebook

“I am specifically interested in writing and how it can be utilized as a tool for social justice,” Milosevic said.

She was granted the opportunity to do this through Deborah Halprin’s Action Research Class where she was provided with the connections to lead four poetry workshops with the middle schoolers at the Bloomington-Normal Boy’s and Girl’s Club this past summer.

After working with the kids she was inspired to combine their words into a poem that went on to be the inspiration for a mural on Bloomington’s Westside that was completed earlier this month.

The artist who painted the mural, Bruce Clark, was hired through a grant made possible by the Action Research Center which is led by Halprin and provides IWU students opportunities to work within the Bloomington-Normal community.

“The kids talked about serious subjects like the pandemic and the Black Lives Matter movement. Many of the students were BIPOC (black, indigenous, people of color) and I could tell that they were already beginning to understand the inevitable obstacles they will have to face.”

“These students had so much to say– it was like they were waiting for somebody to ask them about their feelings. They wrote about racial discrimination, violence, death, abuse, meditation, the importance of breath and peace,” Milosevic said.

The poem inspired by the children and featured on the mural is as follows:

holding on to each other

placed on a silver platter–

there for me to use at my disposal,but it doesn’t stop me from sitting

through breath, through peace.

we need to talk to each other–

look with your eyes instead of reacting

i am brave, and i breathe, even

when they don’t want me to.

i am brave and i breathe,

breathe in and out,

breathe in and out,

i will become a scientist

belong in the lab,

i create my own worlds.

i will love myself.

you breathe with me now.

Along with this project, Milosevic was awarded an Eckley grant which she completed with advisor Mike Theune this past summer. Photo: Yovana Milosevic

She stresses that we can learn so much from the youth of our communities.

“I believe that children should be empowered to speak through whatever medium that may be for them– whether it’s through written words like the poem, or artistic representation, like the mural. We miss so much when we don’t listen to what our kids have to say, and more than anything, this process has reminded me of the raw feelings that children experience, as well as the indifference they are often met with by adults” Milosevic said.

She was moved by the children and found that, even at such a young age, they had so much to say.

“Some students cried while they were writing. Some wrote things and didn’t want to share, and I said that’s okay– the most important thing is that you’re feeling. Even if there aren’t tangible results, there is still a change in those students because they have confronted their connection to the world” she said.

While Milosevic humbly passes all of the praise on to the children of the Boy’s and Girl’s Club, Dr. Mike Theune, who served as her advisor during her summer Eckley research, a separate project, is constantly impressed by her talent as a poet.

“Yovana is a hard-hitting, high-energy, politically-engaged poet. I’m thrilled to see that she found a way to share her passion with younger students, helping them to express what matters to them with the kind of grace and power that makes it matter to others, as well” Theune said.

Milosevic hopes that the project inspires others the way the children have inspired her.

“I hope that this mural creates a sense of community, both for the children on the Westside, and the community at large. There are so many talented young writers waiting to be discovered, and my greatest hope for them is that they are encouraged to pursue the things that make them happy. I hope this mural inspires people to make more public art and get involved in community investment” she said.

On Monday, October 19 at 4pm, there will be a dedication for the mural, which is located at the corner of Washington and Allin Streets, near the West Bloomington Revitalization Project (WBRP).

The event will be socially distanced, open to the public (with masks required) and will feature various speakers along with Halprin and Milosevic.