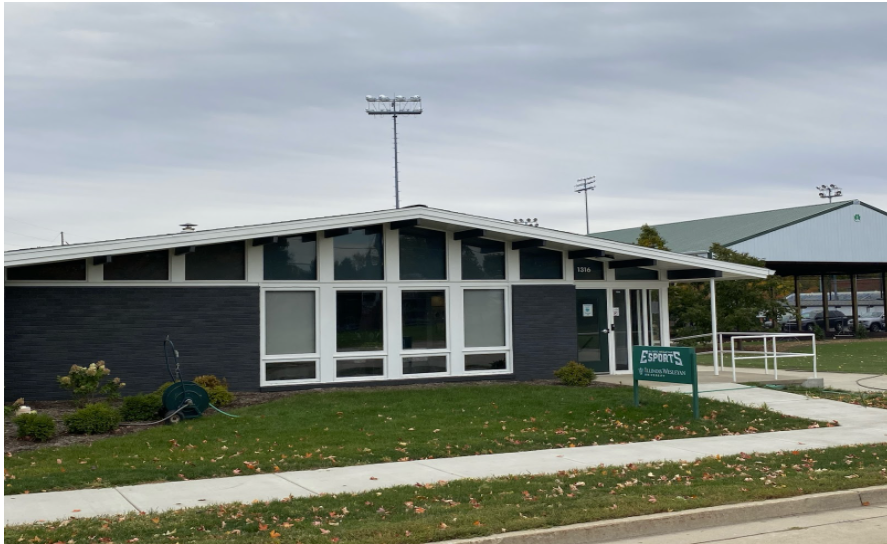 Illinois Wesleyan University added a brand new Esports facility. Located between the softball and soccer field. This addition accommodates the growth the team has seen since the fall 2017. The team now competes in the games League of Legends, Rocket League, Overwatch, Fortnite and Super Smash Bros.

After this past year, the old Esports arena located on the second floor of Hansen Student Center was no longer able to accommodate the size of the program. IWU decided to build a brand new facility for the team to practice and compete in.

The new facility has over 50 computers, a competition room, a conference room, two student lounges and a streaming room. There are two floors and with this new space, they have been able to continue to practice and compete throughout the pandemic while maintaining proper social distancing.

“The new facility provides a high-quality gaming experience with top-of-the-line equipment and amazing safety precautions for the COVID-19 protocols since it was built during the pandemic.”sophomore Kyle Brandtjen said.

There are sanitizing stations throughout the building, plexiglass between every station, capacity limits and mask-wearing requirements. Practices have not needed to slow down nor stop due to the pandemic.

“It also provides much more space for the new gaming teams that have been added this year, Overwatch, Rocket League and Super Smash Bros.” Brandtjen said.

With this added space the program can continue to add new competitive games that reach a greater audience and recruiting class of gamers.

“The goals with this facility are to grow, expand and showcase the talent and amazing environment IWU has brought to Esports,” Brandtjen said.

Sophomore Parker Penn said “this new facility shows a bright future for Esports. The facility allows all teams to progress as players and coaches. The changes we have already seen in just three short years since being a part of IWU shows how great our growth is.”

“Even if the teams aren’t always winning, the program has already brought in over 80 students so the university’s investment into the facility and the program is already paying off,” Penn said.

Esports recently won the collegiate League of Legends championship in the fall of 2019 and is currently ranked No. 12 in the country.

Since joining IWU three years ago the Esports program consistently ranks as a top 10 program in the country, and is currently ranked No. 5 by  ValueGamers and No. 6 by BestColleges.com.