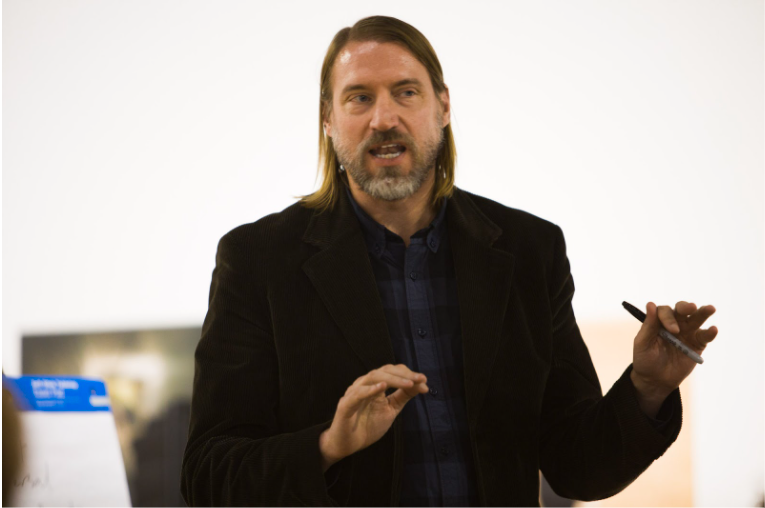 Professor of English Mike Theune has been very involved in the fight to save the humanities at IWU.Photo: Illinois Wesleyan University

Many of the programs marked for closure were part of the humanities including French, Italian, religious studies and anthropology.

Michael Theune, Robert W. Harrington Professor of English, said the closure of these programs questions everybody’s sense of what the university is.

He said it seems as though the administration and board have begun a process to shift the university towards an institution that focuses on pre-professional programs.

Senior Samira Kassem spoke at IWU’s “Heeding the Humanities” event, and said the humanities are necessary because otherwise “STEM would be nothing more than the numbers.”

“It is within the humanities that we find ways to implement the findings of STEM in ways that help people innovate the world as we know it,” said Kassem.

“Without each other, the disciplines will fall short in their ability to make change.”

According to Theune, after the closure of these humanities programs, nine faculty members were put at risk of receiving terminal contracts.

One faculty member may be terminated at the conclusion of the terminal year’s appointment.

“This is disingenuous and insulting. At one level, all faculty have been impacted by the administration’s and board’s decisions in the past few months.

The administration and the board have shredded the supposed protections of tenure and practices of shared governance at Illinois Wesleyan.”

Theune said careers, vocations and life’s calling have been shortened and disrupted.

“And were these voluntary agreements?” said Theune.

“Maybe in the most technical of ways, but these faculty members who took agreements, they took deals because they felt vulnerable.

Given the opportunity, I’m certain that each and every one of the nine would’ve rather had their tenured positions reinstated, at least in the version of the university which existed prior to this summer.”

Kassem said she is “disgusted” with the treatment of the faculty.

“As I watch this administration treat so poorly the very faculty who inspired me the most as an activist and as a human, I am beyond disappointed,” Kassem said.

“As I watch this administration treat so poorly the very faculty who inspired me the most as an activist and as a human, I am beyond disappointed,” Kassem said.

The American Association of University Professors [AAUP] wrote a letter to President Nugent and Board of Trustees Chair Tim Szerlong to question the actions of IWU and get further clarification from the president and the board.

The administration and board responded to this letter, and on September 21 the AAUP announced that an official investigation would be conducted to look into the university’s actions.

According to Theune, the program evaluation was conducted “with the understanding that no faculty would be terminated as a result of the process.”

He said that in the minutes from a 2019 faculty meeting, Nugent’s opening remarks discussed that the program review process would not result in the termination of tenured faculty members.

“I am just so appalled by how poorly treated some of my esteemed colleagues have been,” said Theune.

“So many of them have given their lives to their careers at Illinois Wesleyan. They’ve made this place the place that it is. And then to have the institution, or representatives of the institution, treating them so unfairly is a real shame.”

According to Kassem the humanities are needed “now more than ever.”

“The humanities are not disposable, and if the world seems scary now, you do not even want to imagine what it would be like without them,” Kassem said.