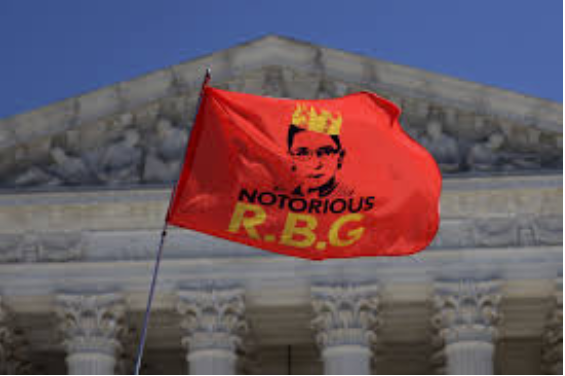 The question on everyone’s minds right now is who will replace Supreme Court Justice Ruth Bader Ginsburg as both President Trump and Senate Majority Leader said they would move quickly to fill the seat and move forward with a confirmation hearing before RBG had even been laid to rest (CBS). A lot could be said for why or why not this should be allowed, but the most important thing we should rely on here is precedent, like most Supreme Court cases would.

The last Supreme Court Justice replaced was Antonin Scalia after he passed away during President Obama’s second term. Obama initially nominated Chief Judge Merrick Garland as Scalia’s replacement, but his nomination was blocked by Mitch McConnell who didn’t allow any hearings to be held for him (USA Today).

Garland’s confirmation would’ve given democrats a Supreme Court majority lead for the first time since 1970, but McConnell said that any decision made by the sitting president regarding a supreme court nominee would have no effect and should ultimately be made by the next elected president (USA Today).

Regardless, McConnell said that he would be willing to help President Donald Trump fill a vacancy before he is up for re-election. McConnell claimed he was going by the “Biden rule” where Joe Biden, who was the Senate Judiciary Chair in 1992, declared that President George H. W. Bush should have to wait until after the following election to nominate someone if a vacancy needed to be filled (NPR).

McConnell claimed that this has been a tradition since the 1880’s, but as precedent shows this is not the case. In 1895 President Grover Cleveland’s democratic nominee Rufus Peckham  was confirmed by a Republican-led Senate. A Democratic-led Senate also confirmed President Ronald Reagan’s nominee Anthony Kennedy in 1988. Again in 1991, Democrats held a 57-43 majority, but still confirmed Justice Clarence Thomas who was nominated by President George H. W. Bush (United States Senate). Though only the 1988 confirmation took place right before an election, the Senate majority leaders still did not let the issue of party influence determine whether or not they would confirm a sitting president’s nominee.

Though McConnell claims he is interested in upholding “tradition,” it seems he is only concerned when the Republican majority is at risk and wants to protect his own self interests as well as the entire GOP. It is also interesting that he only went against “tradition” when it involved our only black president. Either way, he obviously isn’t afraid of showcasing his hypocrisy loud and proud, and he wasn’t the only one.

Senator Mitt Romney was the only Republican that voted to convict Trump during the impeachment trials that took place earlier this year. Romney recently spoke out in support of replacing RBG before the election (USA Today), but if he thought Trump should be impeached then why does he think he should be able to nominate a Supreme Court justice replacement? Again, probably because he is protecting the interests of the GOP regardless of his personal opinion of Trump.

“If he thought Trump should be impeached then why does he think he should be able to nominate a Supreme Court Justice replacement?”

Replacing RBG before the November 3 election would not only go against precedent, but it would go against RBG’s wishes as well as what she stood for.

RBG’s granddaughter confirmed that her dying wish was for her supreme court seat not to be replaced until after the election and the least we can do in remembrance of her is to honor her wishes (NPR)..

RBG was and will always be remembered as a pioneer for women everywhere and if Trump is allowed to nominate a replacement it will set women back for years.

Although Trump has vowed he will nominate a woman, there is no question that she will be a conservative, and even if it is not a woman, he will still pick a conservative judge which is not representative of the times that we are in. Until Trump proves that he can keep his word then we shouldn’t trust that this will be the case.

Trump’s current front-runner is Judge Amy Coney Barrett who currently serves on the 7th U.S Circuit Court of Appeals in Chicago. She has been labeled a “favorite among social conservatives” (NPR) and known for her anti-choice agenda on abortions and unsupportive of the Affordable Care Act. If confirmed, she would be the youngest judge on the Supreme Court.

If you agree that Trump should not be allowed to pick a replacement nominee for RBG please sign this petition in her honor. Also, if you are interested in seeing who else Trump is considering to replace RBG click here.