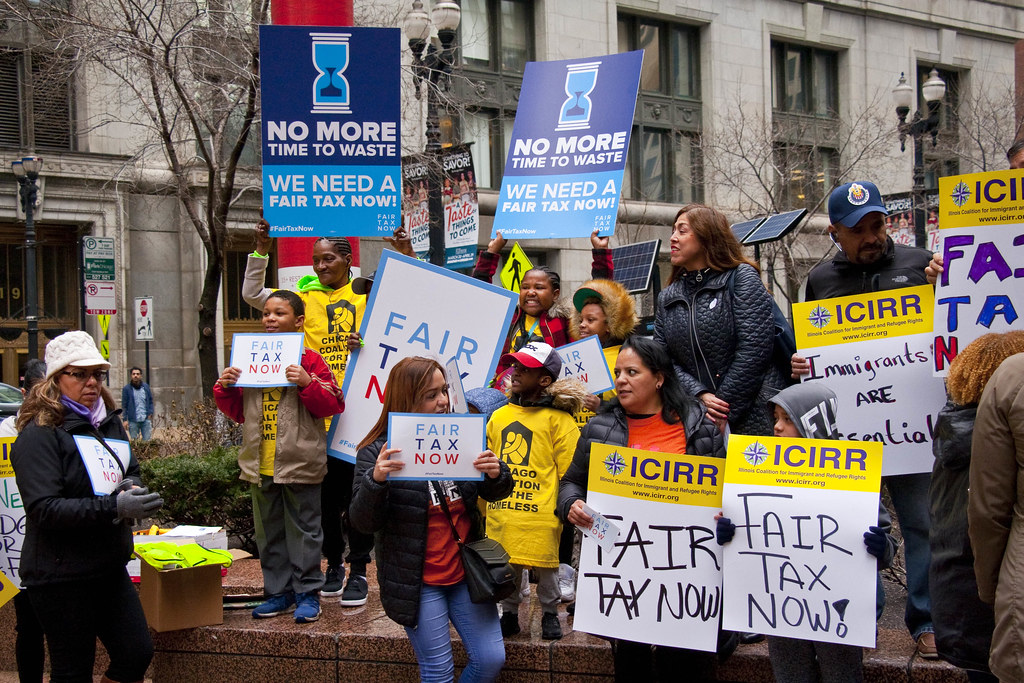 Voters Participate in a Chicago rally for the Illinois Fair Tax.

With all the hype surrounding the presidential election this year, many often overlook other candidates and issues that will be on our ballots come November.

In this election, however, we have the chance to make an immediate and substantial change to Illinois that could help our state get out of a lot of financial trouble.

When you go to the polls (which you absolutely should), there will be a nonpartisan yes or no question asking you if you support the Illinois Fair Tax.

We would like to use this week’s editorial to help you understand what the Illinois Fair Tax question is all about and to combat the misinformation that is being spread by smear campaigns funded by Chicago millionaires.

Currently, Illinois is one of just five states of mixed party majorities that have what is called a flat tax system.

In a flat tax system, all tax brackets pay the same rate of income tax no matter how much they are making, and the legislature cannot raise taxes on one bracket without raising taxes for everyone.

The outcome of this system paired with other taxes, is that people at the poverty line or in the middle class end up paying more in taxes than people who are making millions.

When the pandemic hit, Illinois had only about $60,000 in their ‘rainy day fund’ which was only enough to support our state for a couple of seconds.

Since Illinois’ current tax system does not require the ultra-wealthy in our state to pay their fair share, there is nothing the legislature can do to increase state revenue without increasing taxes on the working class.

The Illinois Fair Tax proposes that we join the majority of other states in the nation and the federal tax system with a progressive graduated tax.

The proposal promises that any individual making $250,000 annually or less will not see a change in their taxes and that individuals making less than $100,000 a year will likely receive a tax cut.

The goal of this change will be to increase taxes for those in the highest tax bracket which only makes up three percent of Illinoisans and less than one percent of people in Mclean County.

The increased revenue from the ultra-rich in our state finally paying their fair share will be an additional $3.4 billion that the state can put towards infrastructure, education, public programs and pandemic relief.

There are currently many campaigns being funded by Chicago billionaires that are spreading lies about the Illinois Fair Tax and claiming that working class families will have their taxes increased.

As it is written into the policy that no one making $250,000 or less will see a tax increase, it is clear that the message of these anti-fair tax campaigns is simply untrue.

We urge you to spread the word to your friends and family and vote ‘yes’ for the Illinois Fair Tax on November 3.

This is not a partisan issue, it is a proposition that could help change our state for the better and get rid of an outdated and unfair tax system.

Whether you are a Democrat or a Republican all Illinoisans will benefit from the ultra-wealthy paying their fair share and increased revenue for our state.

Even if you do not vote for anything else, sending in a ballot just to vote YES on this proposition will be worth it.