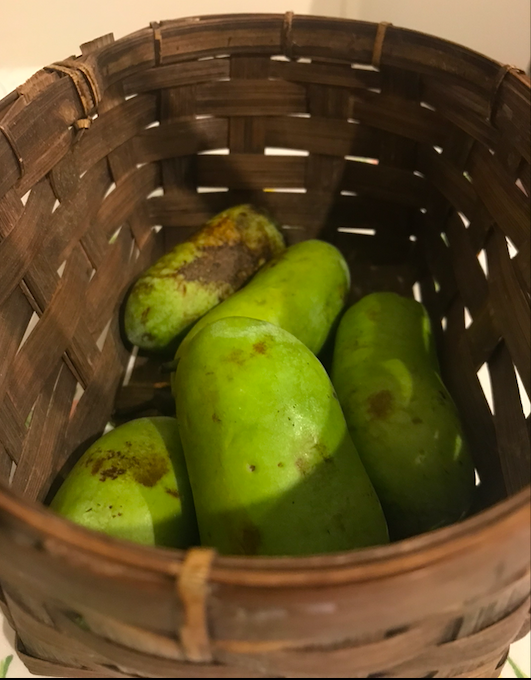 Pawpaws in a basket

Up until last year, I had never heard of a pawpaw – nor of a banango, custard apple, prairie banana, asimoya, quaker delight – or any of the other popular names for this unique fruit.

A delightful custardy blend of banana and mango; there’s nothing quite like the sweet, floral taste of a pawpaw. And the best part? It’s the largest native fruit of North America.

That the pawpaw is largely unknown is nothing short of a tragedy, but it’s not an unexplainable one.

Most grocery stores do not sell pawpaws on account of their short season and how quickly they over-ripen at room temperature.

As the majority of us Americans get our food from grocery stores, there is little reason why we would ever be introduced to this fruit.

But this fruit’s rarity is as much a result of poor supply chains as it is the settler-colonial history of America.

European settlers largely grew those crops and food products they knew from their homeland and those introduced to them after the Columbian exchange.

While we are often entertained around Thanksgiving with tales of peaceful agricultural exchanges between First Nations and these settlers, such tales are full of historical inaccuracies.

There was no room for either First Nations people nor their agricultural practices for settler colonialists who were driven by their imperialist belief in Manifest Destiny.

While much has shaped agricultural practices in America since these early days – industrialization, collection of food companies, and a disturbing lack of any comprehensive regulations – we owe more of our contemporary practices to settler colonialists than to First Nations. Rather than work with nature, our food system largely works against nature. A casual glance at the growing practices of Central Illinois reveals this antagonism against the environment.

Such a food system cannot survive in the wake of a global climate crisis. Rather, any system must work with nature and the local environment to truly succeed. This requires incorporating more native fruits and vegetables into both our food system and diets, eating things like pawpaws, pecans, chives, dandelions, sage, wild rice, persimmons and a host of other overlooked delicious indigenous foods.

For those who have been inspired to try a pawpaw for yourself, there are a few trees behind Evelyn Chapel. If you’re lucky, there may be a few left to enjoy raw or in any number of breads and puddings. I know I’ll be enjoying them for the rest of their season.