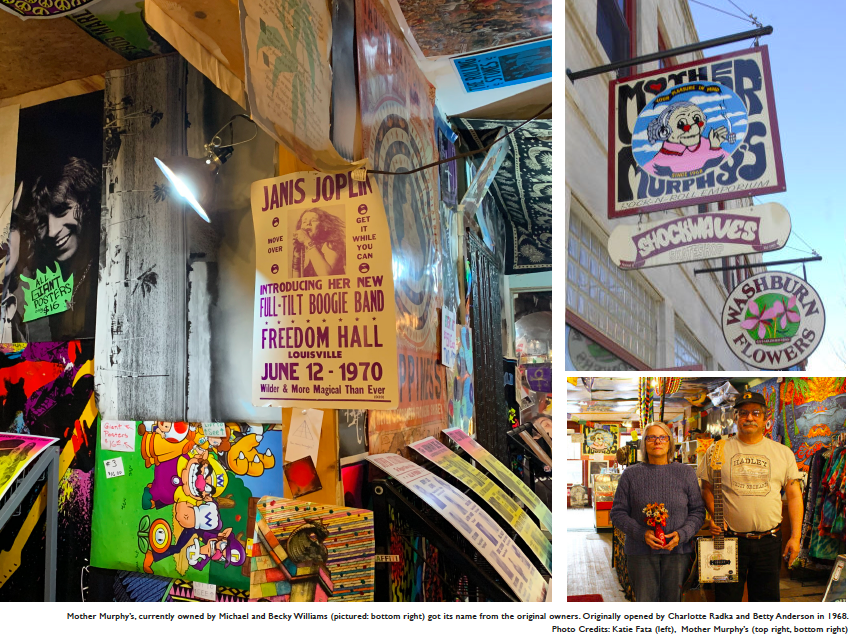 The end of era in Uptown Normal will come on March 1 as Bloomington-Normal staple Mother Murphy’s switches owners after over 30 years.

Mother Murphy’s is a headshop, selling items related to cannabis culture and related countercultures, and shares its space with Shockwaves Skateboards.

M. Williams became involved with the shop in 1979.

Since 1990, Mother Murphy’s has been owned by Michael and Becky Williams.

Under their ownership, the shop was recently named one of the most legendary head shops in the country by High Times Magazine.

The shop has long been a predominant presence in Uptown.

Patrons who enter will be greeted with the graffitied walls of the stairwell which was a tradition that began in the late 70s by the original owners.

With the new legalization laws in Illinois, M. Williams noted that it felt like the perfect time to retire.

In October 2019, Governor J.B. Pritzker signed legislation to allow the licensed growth, sales, possession and consumption of cannabis for adults 21 and older.

In January, Illinois became the 11th state to legalize recreational cannabis and the first to legalize commercial sales through the legislature, instead of a referendum.

“The legalization of marijuana has ushered in a new wave of kids that are interested in this culture,” M. Williams said.

The Williams’ said in a statement to the community that they wanted to thank all of their customers and employees for an incredible journey.

They continued on to say that as they neared retirement, they were looking to find a new owner that would allow for a new perspective and continue established Mother Murphy’s brand.

“I was really upset when I found out that the owners were selling the shop because it’s been such a staple in my Bloomington-Normal experience,” junior Amy Gourley said.

Putting an ad out on Facebook encouraging those interested to email them, the Williams’ were surprised by the amount of responses they received.

“We got around 50 emails inquiring how to either purchase the shop or get involved if the shop was turned over to new owners,” M. Williams said.

M. Williams said that from the very first emails with the new owners, whose names have not been released to the public, the Williams’ could tell their intentions were in the right place.

“The new owners, a couple of young cats, told us they wanted to be the ones who ushered in the next chapter of Mother Murphy’s,” said M. Williams.

The shop has changed and evolved over the years as the couple noticed different demands from the community.

These changes included the addition of Shockwaves Skateboards and, at one point, the shop heavily focused on carrying vinyls.

“Part of the shops’ allure for both the owners and patrons is that it has been able to evolve and adapt to changes,” B. Williams said.

According to M. Williams, the shop is an open canvas for the new owners, but he and his wife do hope that the “welcoming vibe” stays.

“Knowing that the new owners are young people who have grown up with the shop makes me more confident the vibe will be preserved,” Gourley said.

Both owners noted they felt like they have raised a lot of people, both workers and patrons, and have watched a lot of growth happen in their shop.

“We just want patrons to feel like they belong,” B. Williams said.