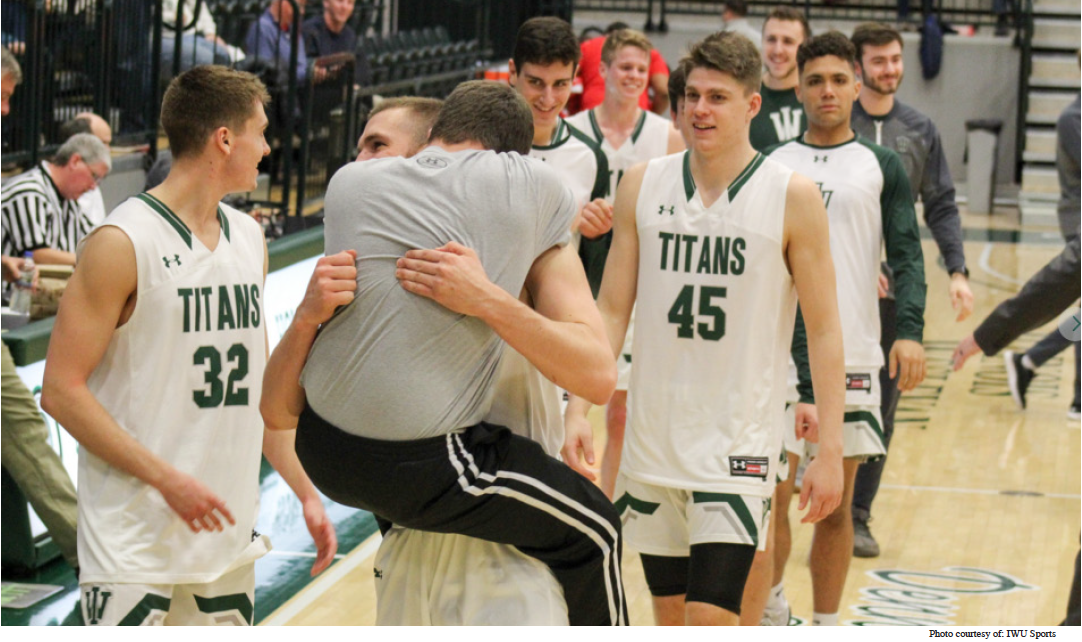 Since the tragic passing of Kobe Bryant and his daughter Giana on January 26th, it has been an emotionally turbulent time in the basketball world.

While it has affected players of various ages in the NBA, particularly those who knew him personally, college students have been reeling from the tragedy as well.

Kobe’s peak in the NBA came at a time when the current generation of collegiate athletes was first learning how to shoot a basketball, so the effect he has on their play-styles is nothing short of monumental.

The Titans emulated Kobe’s coined “mamba mentality” on Tuesday, February 24th, with a 74-67 victory over Carthage in the quarterfinals of the CCIW tournament.

With the win, the Titans improved to 18-8 on the season and earned a semi-final match-up with Augustana College.

Coming out of a tightly contested first-half in which the Titans trailed by two, they came out of the break with hot hands, opening on a 26 to 13 run.

IWU saw this lead dwindle to three after a turnover led to a Carthage basket with 1:31 to play in the game.

But the Titans were able to seal the deal down the stretch with some timely baskets from sophomores Matthew Leritz and Cory Noe, and a clutch steal from sophomore Peter Lambesis.

Leritz and Noe led the Titans in scoring with 18 points apiece, Lambesis added 13 with seven rebounds, and junior Colin Cheany hit some crucial three-pointers down the stretch.

As a team, the Titans knocked down 10 three-pointers on 22 attempts, while going 29-for-58 from the floor overall and 6-for-8 from free-throw line.

Carthage finished 28-for-58 from the field and went just 5-for-24 from three-point range.

The Titans also forced 13 turnovers, turning them into 14 points.

Junior Doug Wallen also through in 14 points and had some things to say about the rivalry with Carthage and his Squad’s chances.

“We always know we’re going to get their best shot every time we step on the floor,” Wallen said post-game

The CCIW is filled with great teams every year so we know to never go into a game thinking we have already won,” Wallen said.

“Our chances of winning the tournament are no less than anyone else. Every team left we have beaten and we are ready to compete,” Wallen said.

Just a day after Kobe’s moving memorial service in Los Angeles, he was certainly in the minds of our Titans on Tuesday night.

“The passing of Kobe Bryant was very shocking to my teammates and I,” Wallen said.

“He was the ultimate competitor and almost seemed invincible. Everyone wanted to make the fadeaway Jump shot yelling “Kobe!” as a kid,” Wallen said.

“He changed the game and certainly was one of the greatest to ever play,” Wallen said.

Illinois Wesleyan hopes to advance to its first CCIW Tournament Championship game since 2015 when it faces off with second-seeded Augustana Friday night.

Tipoff is scheduled for 5 p.m. at Gregory Arena on the campus of North Central College.