Acapella groups to compete at ISU 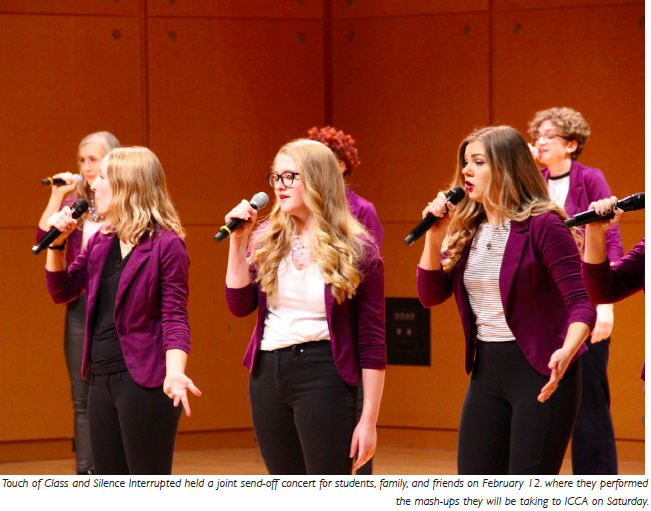 The Varsity Vocals International Championship of Collegiate A Cappella (ICCA) is currently the only global tournament that showcases the art of student acappella, according to ICCA.

Touch of Class and Silence Interrupted have been preparing since the fall semester, beginning with a video audition submission.

Both groups made it past initial cuts and were then told by ICCA a few months later with where they would be competing and what date.

As soon as Touch of Class got back from winter break, assistant music director Jasmyn Taylor gave the group the finalized mashup.

The group started doing choreography at the beginning of this semester and have spent the last week adding final touches before the competition. Silence Interrupted’s set is arranged by seniors Alexa Letorneau and Mark Matthison and has also been working through since winter break to prepare.

“It was great that we started preparing earlier this year because last year we crammed songs in at the last minute and this year we really know what we’re singing,” Buchmann said.

TOC’s mashup this year includes songs “The Kids are Alright,” “All We Have is Love,” “Head Above Water,” “Flashlight,” and “You Will be Found.” Silence Interrupted will perform “Homemade Dynamite,” “90 Days,” and a mashup of “Do You Wanna Do Nothing with Me” and “Love on Top.”

“At this point, we are meeting every evening and we work on reviewing music, tightening our harmonies, running the set with choreo, and cleaning up areas that are messy,” Gabrielle Ghaderi, Silence Interrupted member, said.

The acapella groups on campus also act as a place for music majors and non-music majors alike to get involved with performing.

It’s difficult to find musical opportunities on a small campus when a student isn’t a music major, according to Buchmann, but the groups provide that opportunity.

“Touch of Class gives me the room to sing, play the piano and arrange music with a group of girls who love the same things I do,” Buchmann said.

Attending ICCA also gives both groups a place to showcase their talents and experience different groups from around the state.

“I enjoy ICCA because of all the hard work that’s needed to pull together an amazing performance,” Hannah Horn, Touch of Class president, said.

In order to prepare for the competition, Touch of Class and Silence Interrupted have spent time outside of rehearsal in an attempt to get a competitive edge.

“Preparing for ICCA definitely pushes us as a group to be the best we can be. You would think that three hour rehearsals that end at 11 pm would get to us eventually, but really it has only made us closer as friends and stronger as performers,” Ghaderi said.

Both groups will perform in the Illinois State University Center for the Performing Arts at 7 p.m. Tickets are available for purchase on ICCA’s website or Ticketmaster for $25.