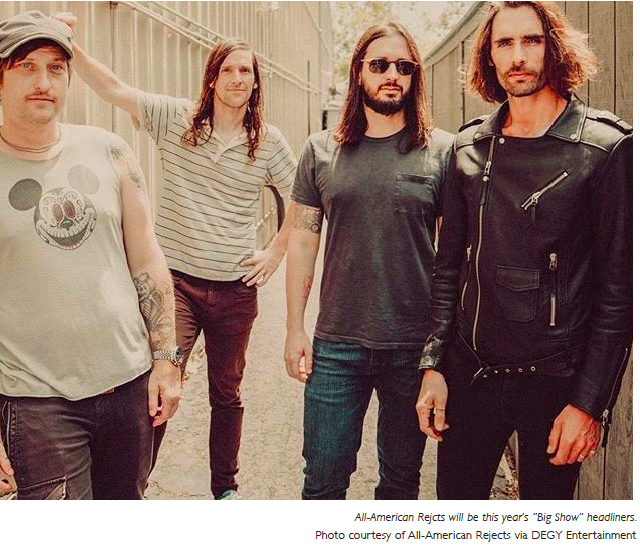 CAB has hosted a spring-semester performance for the past four years for students. Past headliners have included SuperDuperKyle, B.o.B. and Waka Flocka.

“I’m really looking forward to the students being able to enjoy themselves at a free concert on campus,” said CAB director Hannah Horn.

The All-American Rejects will be preceded by Jej Vinson, a former contestant on The Voice Season 16.

Since forming in 1999, the group have released four albums, numerous hit singles such as “Swing, Swing” and “Dirty Little Secret” and toured alongside Blink-182 and Bon Jovi.

While the band did not formally break up, they did take an extended break following the release of their 2012 album “Kids In The Street.”

What sets this year’s show apart from the others is the list of available artists was accurate on pricing CAB could offer and availability for the show date.

CAB began hosting the “Big Show” in 2016 and have gone through a variety of techniques in how the show is run.

For the 2020 show, CAB took a different approach than past years.

In the past, specifically 2019’s show, the list of artists given to CAB and the student body was inaccurate.

Brandon Common assisted by CAB then took over and was able to save the show and put it on in April after the contracting issues.

Past roadblocks have impacted not only the way the show is run but also the artists that are considered for the spot.

“Our idea was that within four years at the university you should know one of the artists who will perform to move away from our trend of trying to stay with primarily rap and hip-hop artists,” Horn said.

CAB is trying to avoid issues that have plagued the planning in the past by working ahead.

“Trying to be preventative has been key in planning this event and thankfully Kevin Carey and Marjorie Miller have been instrumental in keeping us on task and thinking forward,” Horn said.

Each year, students are given the chance to vote in the fall between various artists for the “Big Show” headliner.

Students were given the option to vote between Andy Grammar, Walk the Moon, Young the Giant, Zara Larsson and All-American Rejects.

“We restricted the genre as per the instruction of administrators to pop to try to draw in a different crowd of people,” Horn said.

CAB is responsible for both setting up the concert as well as taking care of the artists while they are on campus.

“Once we got contracts finalized, it has been mostly pulling together final details from having Shirk set up through the physical plant and making sure the artists are fed on the day of the show and everything else in between,” said chief of operations Lauren Yep.

This year, those attending the “Big Show” will be required to have a ticket and IWU students must bring their IDs.

Tickets are free for IWU students, but students will still need to utilize the Eventbrite site to obtain their free ticket using their ID numbers.

Tickets are available now and will be available until February 22, 2020, the date of the Big Show.

“Looking to the future CAB is going to be more intentional with the budget and bringing diverse artists,” Horn said.