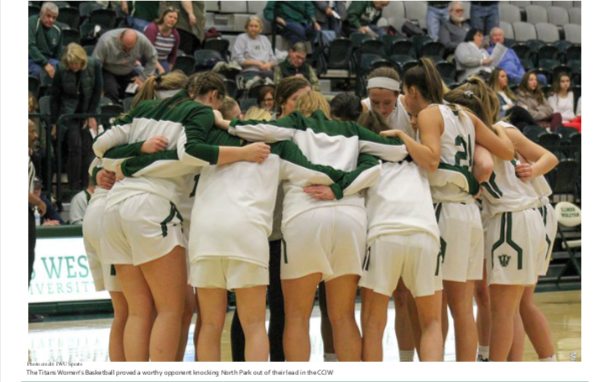 The
women’s basketball team took down North Park securing their second win of the
new year.

The Titan’s move into first place in the CCIW
accomplishing a 4- 1 league record and delivering North Park their first
conference loss of the season.

Junior Kendall Sosa led the Titans in scoring with
a total of 26 points on 11- 17 shooting from the court.

While Junior Riley Brovelli put 17 points on the
board and earned a game-high eight rebounds with an additional five steals and
three assists.

The Titan’s first bucket of was earned by Sosa off
of an outside pass from Brovelli for a three- pointer.

The
Titan’s started out with an explo-sive offense and led North Park by 10 points
going into the second half.

Ending the first half with an 8-0 run and kicking off the second half with a 7-0 run, the Titan’s scored 15 points un-contested against North Park.

Taking
the lead 38 – 21 with a little over eight minutes left in the third quar-ter
the Titans maintained their powerful offesnse.

Lead
by Sosa the Titans scored a stag-gering 27 points in the third quarter
re-sulting in a trailing North Park at the end of the third period 58-44.

Titan
defense held strong, closing ranks in the second half.

The
Titans scored 20 points to North Parks 13 off of turnovers which helped them
build an early lead.

Edging
out North Park’s points the Ti-tans finished with 17 steals and 3 blocks
compared to North Parks 10 steals and two blocks.

Kelly Carlson scored the final points off a long outside pass from Megan Moody to cement their victory at the Shirk Center, 82-51.

A post game interview with the Titan’s head coach Mia Smith she discussed the slow game going into the second half and what they adjusted to get going in the third quarter.

“We
went to faceguard and started the third quarter which is what I wanted to do
all along but they weren’t quite com-fortable in practice but I just forced
them into it and thought they responded very well,” Smith said.

The
strategy forced onto the Titan’s they responded fantastically and began to pull
away by a massive margin in the second half.

With
this victory, the Titans push themselves into the upper part of the standings
at 10- 4 with a two-game win streak .

Looking to continue that momentum Illinois Wesleyan will be traveling to Waukesha, Wisconsin to compete versus Carrol University in hopes of securing another victory and moving one step closer to hosting the CCIW tournament on home turf.