D&D allowing players to immerse themselves in the game 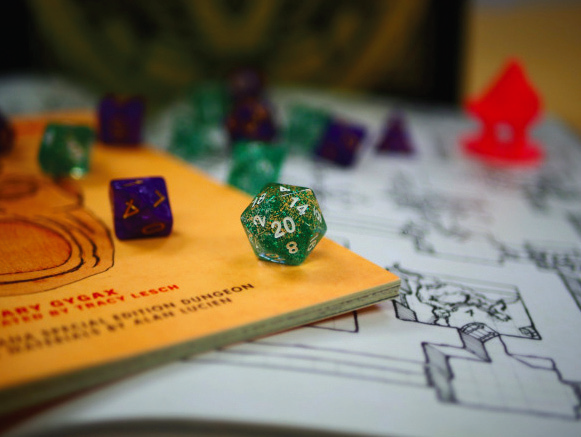 Dungeons and Dragons was originally published by Gary Gygax and Dave Arneson in 1974. Photo credit: pixabay.com

Dungeons and Dragons is what is known as a role-playing game (RPG).

The participants take on the roles of characters that represent them in the game.

One person, the dungeon master (DM) plays the part of a narrator, they are the ones who create the storyline, the obstacles and any characters that aren’t played by the others.

In short, the DM is God.

One thing tabletop RPGs such as Dungeons and Dragons contain that is lost in many computer or video game RPGs is the human interaction that occurs between players and the DM.

Much of this is due to the fact that there are multiple human beings playing the game, and they communicate as their characters would.

Unlike many massively multiplayer online RPGs where the primary interaction between players is out of character, and thus is disconnected from the story itself and the relationships between characters.

The ability to be completely in character is one of the most enticing parts of D&D.

A majority of what occurs between the players is an expression of emotion similar to theatre, because much of what transpires in a game of D&D is acting.

This is present in scenes where the players are directly speaking through their characters.

Also in combat, where you may have to consider if your character would accept the collateral damage of a spell.

“They are also able to control their impact on the world itself as well as the experience of developing human connections outside of the game with the people they play the game with.”

Spells could potentially hit bystanders, or one of the other player’s characters, in addition to the party’s enemies.

D&D also has a flexible presence of a DM affords tabletop RPGs with regards to their characters’ actions when compared to non-tabletop alternatives.

In games such as World of Warcraft what a character can attempt to do is entirely dictated by the system coded into the game for judging actions and results.

In a game such as D&D, your character is generally free to attempt anything they want, as long as the DM allows it.

The idea that one cannot anticipate every possibility that characters may attempt restricts the game.

This is because of the fact that what governs the outcome of actions within WoW is a system of code that cannot respond to actions outside of what has been programmed into it.

With RPGs with a DM, the fact that humans can process unanticipated actions allows the DM to determine the results of unforeseen actions the characters may undertake.

Players are fully able to immerse themselves into their character, taking action in ways that a precoded game would not allow and they can explore the extent of strategy, knowledge, and their DM’s sanity.

All of this is not to say that alternatives to tabletop RPGs are not enjoyable, nor is it to say that they are less enjoyable than D&D and similar games.

Certain facets of RPGs that many people find engrossing include both the ability to fully inhabit a character outside of oneself in a world that is not our own.

They are also able to control their impact on the world itself as well as the experience of developing human connections outside of the game with the people they play the game with.