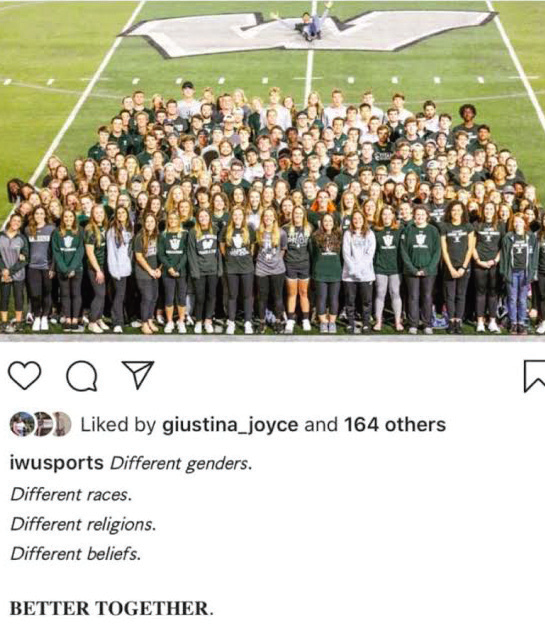 This past week, IWU’s Athletic department committed a major faux pas on their Instagram account posting a picture of IWU’s Titans.

Attempting to showcase diversity and inclusion efforts within the Athletic department they instead posted a picture poorly illustrating the exact point that they tried to make.

“The intention of the photo came from an honest place, but the execution missed the mark. There are resources on campus such as the Office of Diversity and Inclusion that work diligently to ensure the campus is more inclusive and better educated around how to avoid issues of tokenization of students,” Quentin Jackson ‘21 said.

One large issue with the photograph is the underrepresentation of IWU athletes in the photo.

If the university claims that 31 percent of the student population is involved in intercollegiate athletics, then why is only roughly a third of that group represented?

Perhaps student-athletes were busy at the time, but if the department truly wanted to represent the Titans then they should’ve tried to organize the time and date for the photograph better.

Pulling apart their offensive photo caption, how exactly are different races represented when only a small amount of the poorly-shot photograph could potentially be identified as people of color.

“It is evident from this photo that there is a lack of representation from many minority groups, regardless of gender, religion and race. If you take a look at the comments of that photo, you can tell that many people feel the same way – underrepresented within the athlete community,” senior Angela Roman said.

“For me, it’s almost like they didn’t get any input from students of color or faculty and staff of color that could have stopped this from happening. At the same time, it shouldn’t be up to people of color to educate and guide white people on how to be inclusive and keep them from being insensitive,” Shakira Cruz-Gonzalez said.

The post has since been removed off their social media account but a formal apology remains to be given for the offensive misrepresentation.