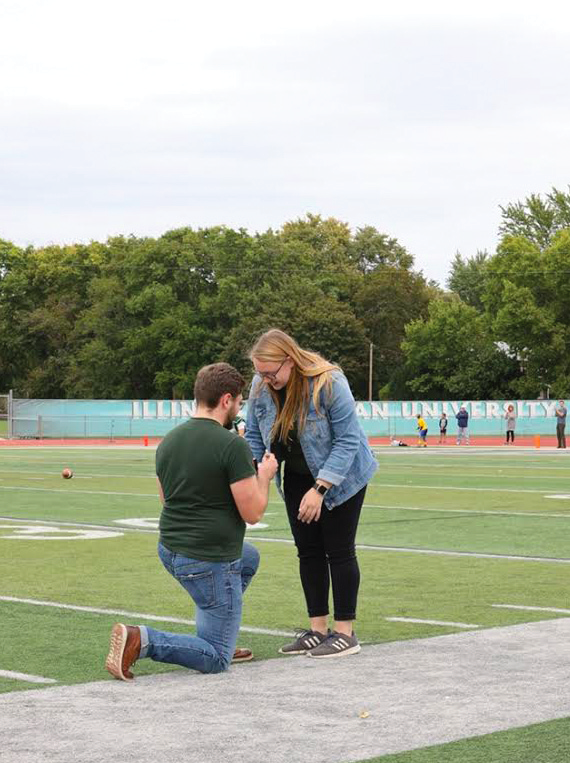 The Titans weren’t the only ones victorious on the field, as their 42-14 win was overshadowed by the couple’s halftime engagement.

The halftime minutes were spent with recognitions and announcements on the field, and Avise-Rouse created a plan to get Reichert down to the turf.

“He apparently went into Kevin Carey’s office and figured out a way to get me onto the field that I wouldn’t pick up on,” Reichert said.

Carey, Director of Student Involvement at IWU, knew Reichert from Greek life and was able to use that as an excuse to distract her, telling her they needed to announce something related to student involvement.

“I didn’t really understand why Kevin and Kristian wanted me to get on the field.

I just kept asking what was going on, ” Reichert said.

Once she was down on the field, Carey distracted her from watching where her future fiancé was going.

Reichert shared she had no idea what was going on until he started speaking over the microphone.

Addressing Reichert in front of all the homecoming football-goers, Avise-Rouse popped the question to his girlfriend of seven years.

“I’m usually more of a subtle romantic, but I had always pictured proposing in front of family and friends,” Avise-Rouse said.

“I had no idea. I was so shocked,” Reichert said.

“I just figured he wanted both of our families there because it was our last homecoming at Illinois Wesleyan.”

Avise-Rouse explained how he that though he decided to propose on campus, he wanted to include their families and made sure that as many of their family members were present as possible.

“She never thought I would’ve done something so conspicuous.”

Reichert did not catch on to the reason that so many family members made their way to Bloomington-Normal.

“It made perfect sense for him to do it at the game.

It allowed all of our friends and family to be there without me suspecting a thing,” Reichert said.

Though the 2019 Homecoming theme was “Your Story Starts Here,” the couple’s story did not exactly start at Illinois Wesleyan.

The couple, who have been dating since 2012, decided to keep their choices for college a secret from each other to avoid choosing a school based on the other.

When they were seniors in high school, the pair were choosing between several different schools, only having Illinois Wesleyan in common.

When they revealed their decisions, they were both shocked to find out what the other had chosen.

The couple have spent their four years on campus participating in diverse activities, which is why Avise-Rouse thought it made sense to propose on campus.

Avise-Rouse is involved in Phi Mu Alpha, the IWU School of Music, and a number of other activities.

Reichert is currently serving as the chapter president of Kappa Delta and has been involved in many RSOs.

Their campus involvement has formed a community around the two, and cheers were heard all over Tucci Stadium when Reichert said yes.

“Although our story didn’t start here, the next chapter of our lives did,” Reichert said.