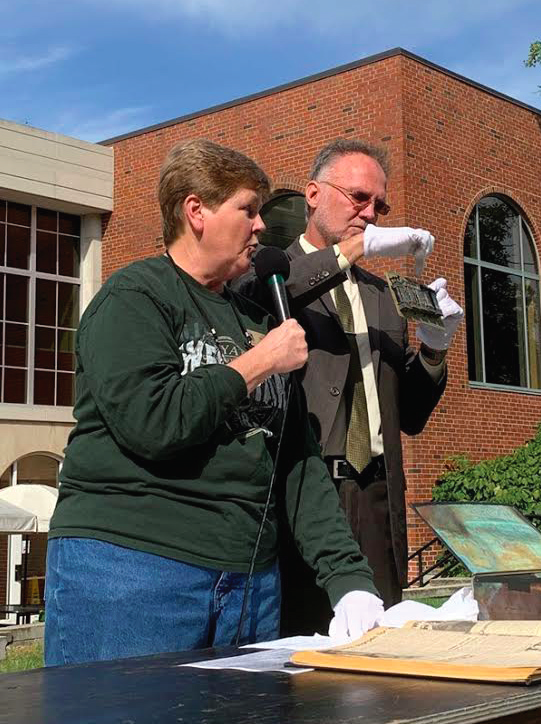 Illinois Wesleyan flipped a few chapters back this weekend by opening the time capsule left on campus in 1969 by Frank Borman.

During homecoming, alumni and students were invited to watch Meg Miner empty the contents of the capsule 50 years after the capsule was placed.

Apollo 8 astronaut Frank Borman received an honorary degree from Illinois Wesleyan in 1969 and placed the capsule at that time.

The capsule’s contents were unveiled for viewers in front of the Memorial Center steps, and Meg Miner, University archivist, was just as surprised as everyone watching.

Many of the contents came out of the box in rough condition.

“No one was expecting it to be in terrible condition,” Miner said.

The capsule is not the first to be revealed on campus, with a similar capsule coming out of the old Sheean Library.

The contents, however, were in good condition, leading everyone to believe that the Observatory capsule would have similar results.

“We think that moisture may have gotten into the box, and a deteriorated battery may have always been part of the issue,” Miner said.

Less than three months after they orbited the moon, the Apollo 8 astronaut laid the capsule into the cornerstone of the newly built conservatory at the convocation where Borman also spoke to graduates.

Borman was the commander of Apollo 8 which was the first mission done by NASA to fly around the moon.

At the time Borman placed the capsule, he was on campus to receive a science degree at the 1969 Commencement.

Originally, the capsule was meant to be taken out of the Mark Evans Observatory after seven years but, for an unknown reason, it stayed in the exterior wall of the observatory.

“The Space Race was incredibly political, and the astronauts of Apollo 8 were given the option to talk about whatever they wanted on their Christmas Eve recording,” Miner explained.

On the recording, the astronauts read a verse of the Old Testament that they felt would be universal across dominations.

“They chose to speak on something emblematic, and that’s telling of their goal,” said Miner.

Miner also shared that everyone was surprised to find a coin in the capsule Miner discovered had traveled into space with Borman.

According to Miner, the contents may seem insignificant or invaluable to the campus currently, but it is what the community in the 1960s wanted to project to future IWU students.

“When we think of value, none of the things in the capsule have monetary value.

But they all have value to our university in terms of legacy,” said Miner.

Miner is working with the IWU Physics department to permanently memorialize the contents for students to see for as long as possible. Students can currently view some of the contents of the capsule on the first floor of Ames Library.