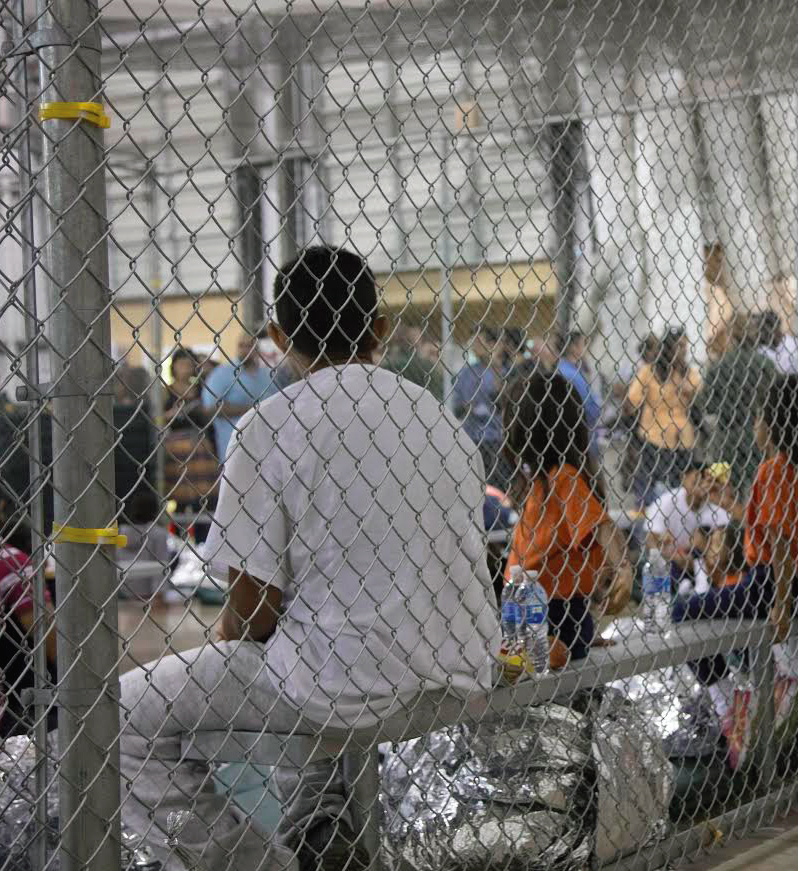 Dr. Kathleen O’Gorman, professor of English at Illinois Wesleyan, presented a talk titled “Children in Cages: Speaking of the Unspeakable” at ISU on September 17.

At Illinois Wesleyan, O’Gorman was a founding member of the Latin America Area Studies Team in the International Studies Program many years ago.

She was also instrumental in helping to bring Carlos Fuentes, Isabel Allende, Ariel Dorfman, and other major figures from Latin America in years past and has also actively worked to bring human rights speakers to campus.

In her talk, she spoke on how she got involved as an interpreter at immigration detention facilities.

In late spring of 2018, she heard that the U.S. was separating children from their families and putting them in cages.

Immediately, she called one of her daughters who lives in California and asked if there was a place they could volunteer.

“The Center for Human Rights and Constitutional Law put out a call for volunteer lawyers and interpreters who spoke Spanish, and it was the first thing that came across her email.

We’re both fluent in Spanish, so we signed up,” O’Gorman said.

She shared her experience at the facilities, touching on the shocking conditions they found and the stories they heard in the detention centers.

O’Gorman specifically told a story of a teenage mother who walked from Guatemala carrying her toddler over her shoulder with braces on her legs.

“I looked it up: the distance from Guatemala City to McAllen, TX, where I met her, is 1,338 miles,” O’Gorman said.

“Where she should have found some respite, some relief from her distress and her exhaustion, we subjected her and her little girl to degradation and abuse.”

O’Gorman was asked to present “Children in Cages: Speaking of the Unspeakable” after an interview with a local radio station, and says she hoped it would achieve a sense of urgency and awareness in her listeners.

“I want people to have to “own” this, to use an unfortunate metaphor.

I hear people say, “We are better than that,” but we aren’t.

We are doing that. We can be better, but right now, we, our government, in our name, and with the complicity of our silence—is separating children from their families, putting them in cages, and torturing them psychologically,” O’Gorman said.

“I want people to have to face that reality every day—to think about how they will answer the question that will be put to them by history: “What did you do when they were putting children in cages?”

“Obviously, I want them/us to fight that. We are going on with our lives as if there aren’t children in cages,” O’Gorman continued.

“We need to be their voice, to refuse to keep silent, to demand their release. To stand with the most vulnerable. To vote.”

She shared that she has learned an “incredible” amount about the Flores Settlement.

According to the National Center for Youth Law, the settlement set national standards for the treatment and placement of minors in what was the Immigration and Naturalization Service (INS) custody.

O’Gorman spoke on the agreement, explaining that it is that agreement that gives them access to speak to the children.

“When we meet with them, it is to determine the extent to which the government is or is not meeting those basic standards of care.

The testimonies of the individual children together form evidence in lawsuits the The Center for Human Rights and Constitutional Law brings to try to improve the conditions of their detention and to hasten their release,” O’Gorman said.

O’Gorman said she considers it a privilege, “if a horrifying one,” to be one of the very few people who work with the children in the facility and can tell them that there are people in the United States who are concerned about them and who are trying to make things better for them.

At IWU, she is bringing back what she learned.

She is offering Latinx Fiction and Latinx Drama classes for the first time, and plans to, in at least one class, incorporate an assignment explicitly grounded in her experience at the border.

“I think [students]—like all of us—have a moral responsibility to be aware of what our country is doing in our name that is a crime against humanity, and I think they—and we—need to try to intervene to get the children out of the cages.

We need to be their voice, to resist the impulse to remain silent.

We need to fight to get them out,” O’Gorman said. “It’s worse than what you’ve read.”

According to O’Gorman, students can educate themselves by choosing classes that will enlighten them on these issues; by volunteering in town at the Immigration Project, or working with ARC to find other places where they can get first-hand experience with immigrants and can make it a priority to go to events on campus that educate them on this and other social concerns.

When she finished her talk, O’Gorman concluded with a heartbreaking call to action: “There are children in cages right now. This is our crime. It is our disgrace.”