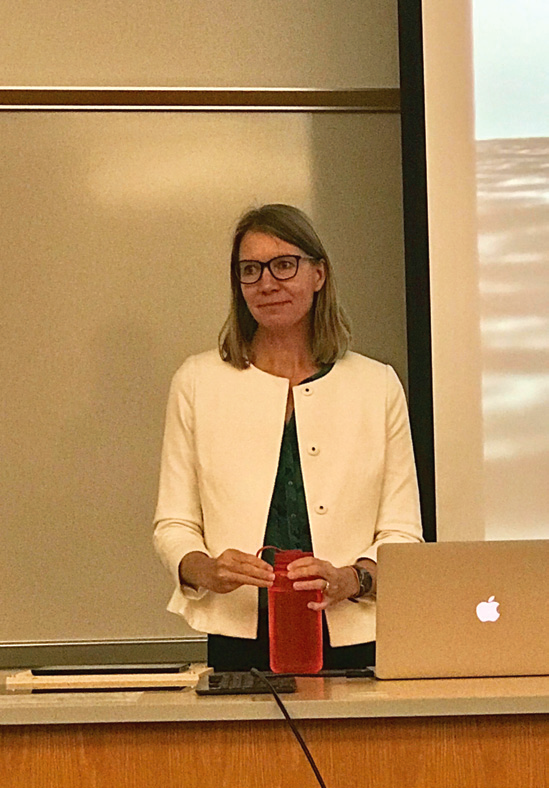 Dr. Catherine O’Reilly spoke on “global patterns and consequences of current lake warming” on campus this past Tuesday evening, September 24. Part of the environmental studies department at Illinois State University, Dr. O’Reilly has received millions of dollars in grants from government agencies, such as NASA and the EPA, for her research on land use and climate change.

Her talk was centered around the ramifications of global warming on lakes around the world. Dr. O’Reilly explained how a lake’s water should cycle in response to seasonal change.

She explained to her audience that water is cooler at the bottom of a lake and warmer at the surface and that the colder water is, the more dense it becomes and the harder it is to mix with warmer water and keep the flow of nutrients, which are more frequently found in deeper water.

O’Reilly then explained algae is found at the surface of water, and needs deep water nutrients to survive.

With the change of seasons, the water temperatures of different depths change and allow for the nutrients to reach the top, where the algae is, which keeps the ecosystem of the lake at a normal level.

O’Reilly included pictures of her trips to Africa in her presentation, where she went to study Lake Tanganyika. The fishing industry surrounding Lake Tanganyika has been extremely lucrative in the past and is slowly dwindling due to climate change. As the planet heats up, so does the lake.

She explained that nutrients at the bottom of the lake are not able to rise to the top, leading to a decrease in algae, which essentially leads to less food for fish and less fish for food. According to O’Reilly, not only has the ecosystem in Lake Tanganyika been disrupted, but so has the economy for the fisheries: fish prices have skyrocketed over the years.

A bundle of fish used to cost a dollar in surrounding area, but is now closer to ten, making it hard to provide for families, especially in Tanzania, where the population is growing at a four percent rate. The country’s population is expected to double in the next 15 years.

O’Reilly then explained that, more locally, Lake Erie is undergoing the complete opposite problem as the lake’s water temperature is rising and creating an explosion of algae, more commonly known as an algal bloom.

According to O’Reilly, the algae that grew in Erie were toxic, and this source of what was supposedly freshwater was untouchable due to such levels of toxicity. The amount of toxic algae has increased by five percent in natural lakes due to rising temperatures.

As seen around the world, the warming of lakes has several effects on all species.

O’Reilly concluded her talk with her current research at Lake Bloomington, a mere 30 minutes from campus. The excess of nutrients in the lake can be attributed to runoff from farmers, as they keep nutrients in their fields in order to save for the next summer’s crop. O’Reilly is working on “ways to help farmers manage their water quality” as to not flood the neighboring lake with nutrients.

“We’re not there yet, but we need to make sure we keep nutrient levels as low as possible,” O’Reilly concluded.