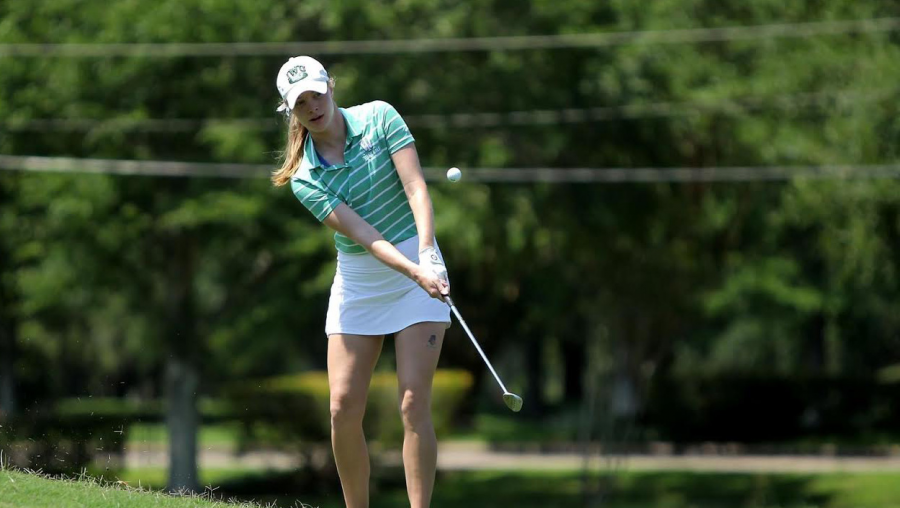 Melanie Wolf (above), looks to lead her team to success in the teams upcoming tournament, where she will compete at home for the last time as a Titan. Photo credit: IWU Sports

Over the weekend, the Titans women’s golf team made the trek to Waverly, Iowa to compete in a two-day invitational hosted by Wartburg College.

The tournament, an event involving 17 other division-three colleges and universities in the Midwest, was the site of tough competition for the Titans, facing several other nationally ranked teams.

After the first day of the tournament, junior Jenna DeMay and senior Rylie Loux’s performances put them in top-twenty individually. DeMay shot 74, putting her in eighth (two over par),while Loux 75 (three over par) tying her for fourteenth.

On the second day of competition, the Titans teed-off in hopes of improving their individual and team performances. DeMay, rising to the occasion, finished the day tied for twentieth out of a field of over 100 golfers.

“Although our finish as a team was not as good in this tournament as it was last weekend, we played tougher teams than we did at Carthage,” junior golfer Maggie Warrner said.

As a result of her performance in the two-day invitational, DeMay was named CCIW Player of the Week. On both days of the tournament, she recorded her team’s top score (74 and 79).

Since she began playing for the Titans two seasons ago, the junior has recorded two top-five finishes, while recording a career-low score of 72, a score shot as a freshman.

Since this season has begun, DeMay has placed in the top twenty in both of the tournaments she has played in, taking 19 overall in the Carthage Shootout on the Border tournament two weekends ago.

This weekend, the Titans will compete in their only home competition of the season, the Illinois Wesleyan Fall Classic, hosted by Ironwood Golf Course (Normal, ILL).

In the same tournament last year, the team placed sixth out of 16 teams. Heading into this weekend, the Titans are confident they will improve on their tournament finish last season.

“I’ve always felt comfortable playing in this tournament,” junior Grace Norton said, “We practice at Ironwood at least a few times every week, so we are familiar with what approaches are needed for each hole, putting us in a good position for success.”

Come out and cheer on the team as they tee-off at 9 a.m. this Saturday and Sunday.