Cross over to the world of Animal Crossing 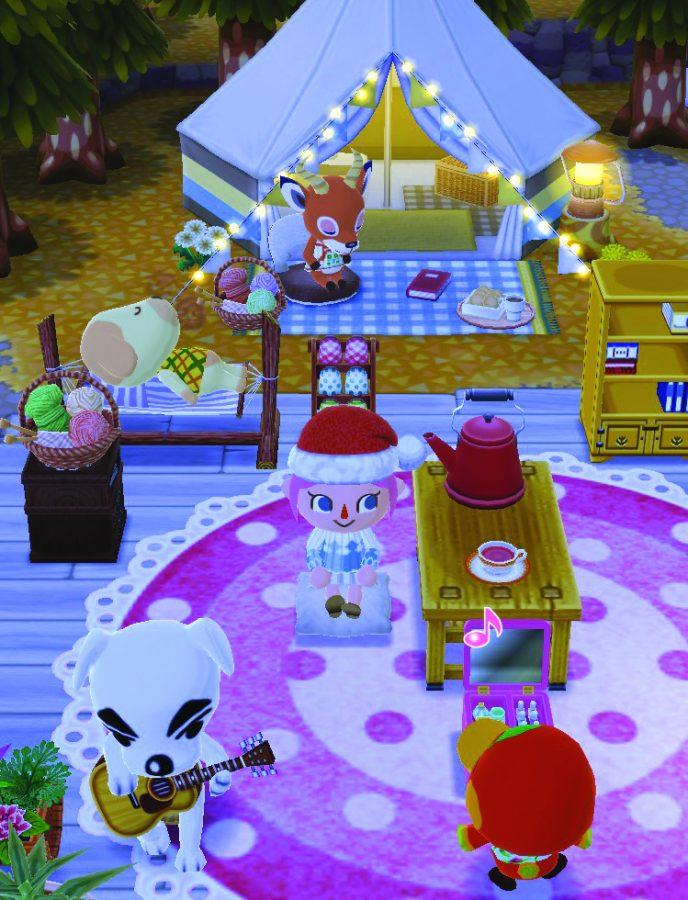 This is an example of a “cute” campsite.

Animal Crossing: Pocket Camp, a game app by Nintendo, went worldwide on Nov. 21, and I’ve been playing it nonstop since.

As a fan of the Animal Crossing series since its first release on the Nintendo Gamecube in 2001, I’m so glad it’s finally accessible to anyone with a phone. The app is free to download on iOS, Android, and every other app store. There are optional in-app purchases, but you never really need them.

It’s simple enough for all ages to enjoy, and it’s perfect for anyone who likes casual games. There are goals to work for if you’re a more “hardcore” player, but it’s kind of counter-productive to be a “hardcore” Animal Crossing player, since the concept of the game is built around slowing down and enjoying life.

Whether you’d like to catch rare fish or bugs, become best friends with all of the animals, or craft furniture for your perfect campsite, there’s plenty of things to do in the app. Everything you do in the game works toward a “Stretch Goal,” and any time you accomplish something, you’re rewarded with crafting materials and both of the in-game currencies.

No previous experience with the earlier Animal Crossing games is required to enjoy Pocket Camp, but veteran players will recognize the animals that camp in the game, like Rosie the cat, Goldie the dog, and Apollo the eagle.

When you start the game, you get to choose from styles “cute,” “cool,” “sporty” or “natural” for your campsite. Each style comes with different tents and furniture, and different animals will want to visit depending on which style you choose.

The animals might be my favorite feature of the game. Currently, there are 40 individual animals that you can meet in the game, including ducks, alligators, squirrels, gorillas, hamsters, elephants and loads more. In future updates, Nintendo plans to add even more animals, but for now, 40 is plenty.

Each animal has a unique look and personality, and every devoted player has a favorite. Mine is Ketchup, a duck that looks like a tomato.

You make friends with the animals by fulfilling their requests for things like fish or fruits that you find in the game’s exploration sites. Once you reach high enough levels of friendship with the animals, you can invite them to hang out at your campsite. They’ll ask you to craft some weirdly specific furniture, and once you do that, they’ll come camp with you. The higher level of friendship you have with an animal, the more kind messages and gifts they’ll give you.

The best part of the game, in my opinion, is when you reach level 7 friendship with an animal, it gives you a copy of the shirt it’s wearing to signify what good friends you are. If only my human friends would do that too.

I wish I could say the app is perfect, but it has a few cons. Due to its detailed 3D graphics, Pocket Camp will eat your battery if you’re not careful. I’ve started carrying around a portable charger so that my phone doesn’t die while I’m playing, but the average player might not be so dedicated.

Downloading Pocket Camp will also take up a significant chunk of your phone’s data. If you don’t have a lot of free space, you might have to delete some pictures or apps to make room if you want to download it.

My only other issue with the app is that it doesn’t show the real time anywhere on the screen. This makes it incredibly easy for players to get sucked into the game and completely lose track of time. I will admit that I’ve almost been late to class a couple times because of Pocket Camp.

Despite these flaws, I can’t stop recommending this game to everyone that has a smartphone. It’s perfect for chilling between classes, relaxing before bed, or obsessively playing until the sun comes up.