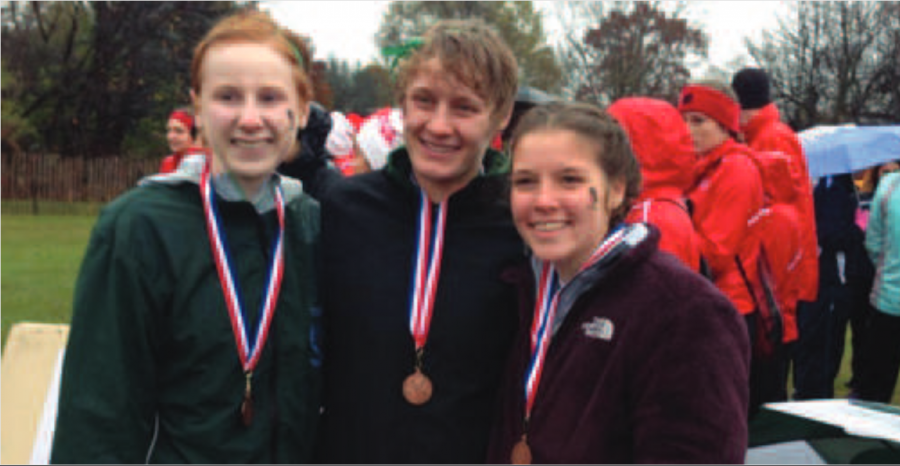 On Halloween, while most people munched on candy bars, the women’s cross country team raced in the pouring rain at the CCIW Championships.

Unfazed by the rolling hills on Carthage’s home course, the ladies sped through the finish line in rapid succession. The Titans scored 59 points, earning second place behind North Central’s 35.

“In these conditions it’s more about toughness than speed,” senior Amanda Macuiba said. “We were confident going into the race because we have such a mentally-strong team this year.”

Senior Erin McCarey led the Titans, finishing the 6000-meter course in 22:16 and landing in fourth place. Senior Amanda Macuiba came in sixth, with a time of 22:57, followed closely by sophomore Clare O’Donnell in ninth at 23:06. Also scoring for the Titans, sophomore Victoria Drake crossed the line in 23:20 and senior Lydia Rudd came through in 23:58.

“I’m really happy with how we competed today,” McCarey said. “We may not have beat North Central, but we still have a lot to be proud of.”

The women will have another chance against their rival — they’ll take on North Central along with 40 other teams at the upcoming regional meet.

“The girls have raced better and better every week. They’ve been incredibly dedicated this season,” Coach Greg Huffaker said. “If everyone does well at regionals, we definitely have a chance to qualify for the national championship.”

The Titans are currently ranked eighth in the region — a fifth place finish in the upcoming regional will earn them a spot in the national meet. The CCIW Regional Championships take place on Saturday, Nov. 14 at Saukie Golf Course in Rock Island, Illinois.

Most people would be upset after spending a chilly day slogging through rain-soaked grass.

But the IWU men’s cross country team was happy to battle the elements. In fact, they were satisfied with their efforts on Saturday Oct. 31 at the 2015 College Conference of Illinois and Wisconsin championships. Despite finishing fifth and returning home with no hardware to show for it, the Titan runners were happy with how they performed.

“A meet like conference isn’t about running fast. It’s about competing, about beating the guy in front of you. As a team we competed well, but we still have a lot more room to grow,” sophomore Tanner Kuenneth said.

At first, a fifth place finish might not seem like something to overly proud of. But, that’s when you have to keep in mind the strength of the CCIW, and the utter dominance of North Central.

For the 42nd straight time, the Cardinals won the CCIW cross country title, having captured the championship every single year since 1974.

Yes, 42 straight championships. For the Titans, the conference championship is as much a chance to focus on individual improvement as it is a ticket to the national level. Kuenneth, sophomore Sam Powers, seniors Derek Anderson and Danny Krob and first-year Seth Borrowman all submitted noteworthy performances, landing in the top half of performers.

“This year, we had a great showing at conference,” Powers said. “The weather conditions were the worst we’ve faced by far, but we grouped up and worked together to overcome them. The team improved its finish from last year, and everyone had a great time.”