Gray skies can’t stop the presentation of these colors 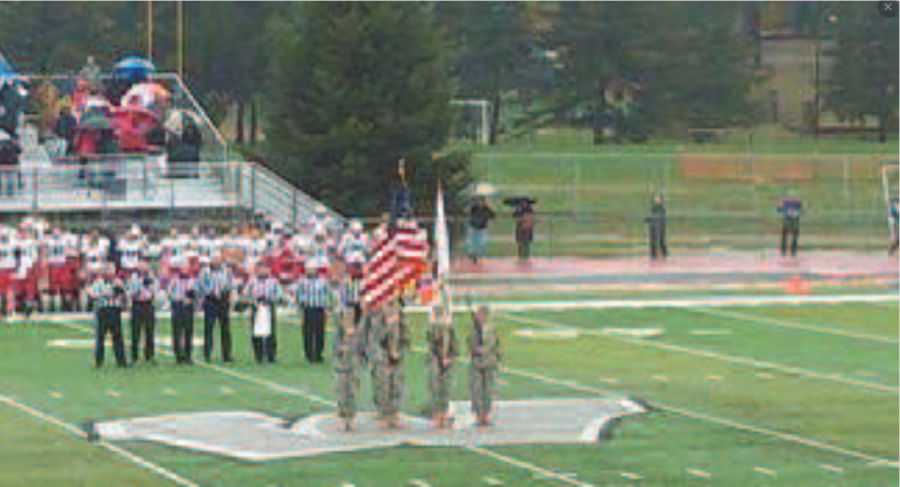 “They’re pretty heavy, actually,” senior Amy Holpuch said. “I was so worried that I was going to drop the rifle because it was soaking wet. It was so slippery.”

On Saturday, Oct. 31 the Illinois State ROTC program did the presentation of colors at Tucci Stadium for the first time – ever. They did so under gray skies and relentless rain, but the consensus was that all went smoothly.

As the program’s chair and professor of military science, Lieutenant Colonel Andrew Bender has been heavily involved in helping the program to flourish on the Wesleyan campus.

The color guard presents colors at every ISU football game, but this Saturday marked their debut presentation for Wesleyan. While the Titan football team had their winning streak brought to a halt at the hands of the North Central Cardinals, Holpuch thinks the future is bright for the program.

“I have had an unbelievable experience through ROTC, and I’m hoping other IWU students that are interested in serving in the military will benefit from knowing an option like ROTC is out there,” she said.

The presentation began at the 20-yard line on the football field, with the team marching to midfield and turning to face the crowd for the entirety of the national anthem. The typical procedure is to present three flags, but due to the game overlapping with the ISU contest, only two flags were presented on Saturday – the national U.S. the Illinois state flags.

There are four Illinois Wesleyan University students who are part of ISU’s chapter of ROTC. They are are seniors Holpuch and Ashton Butler, junior Cameron Ward and first-year Mary Kurtz.

“That’s actually a large number for us, considering that most people don’t know we have an ROTC program here,” Holpuch said.

You might be wondering, “Why is this the year they decided to make their first ever presentation?”

The answer is quite simple. Holpuch and Butler realized that after they graduated, they would leave behind the only two remaining members. Before they left, the two seniors wanted to set the program up for the future.

“Being in ROTC has been my favorite part of being in college. I love the program, and ROTC is so involved in ISU events,” Butler said. “A lot of people have an idea of ROTC and the commitments we make that aren’t accurate. I’d like to get more information out so people could know about how many different opportunities we have.”

The ROTC program is a way for students to begin officer training without having to officially enlist in the military or complete basic training. Those enrolled learn the basic tenets of being a soldier, in addition to gaining valuable leadership skills and professionalism.

The program offers a number of different scholarships, including some for nursing majors. On top of those scholarships, the program offers a number of internships that provide hands-on experience and training. Holpuch, for example, journeyed to the Walter Reed National Military Medical Center where she worked one on one with an active duty military nurse.

Currently, Holpuch is on track to join the active duty branch, and she hopes to be stationed in Germany. “I’m just gonna go for it,” she said.

The ROTC program is flexible, and it is designed to be manageable even for those with a busy major or schedule. On Mondays, Wednesdays and Fridays members have morning workouts (physical training) from 6:00 a.m. to 7:30 a.m. First-year students have one class a week, while sophomores, juniors and seniors have class twice a week. On Thursday mornings from 7:00 to 9:00, members participate in what is called the leadership lab.

They travel to Comlara Park in Bloomington, and from there, things get interesting. They engage in what Holpuch called “simulated missions.” They learn tactics to assess the environment and handle ambushes, with an emphasis on learning to adapt to changes and lead under pressure.

For those who have always wanted to “do something more” or “be part of something bigger,” the ROTC program is one path to consider.

The next time you’ll be able to see the ROTC presentation of colors will be the last time during the fall semester. The color guard team will present before the Titan men’s basketball game on Nov. 14, and their next presentation won’t be until the spring semester.