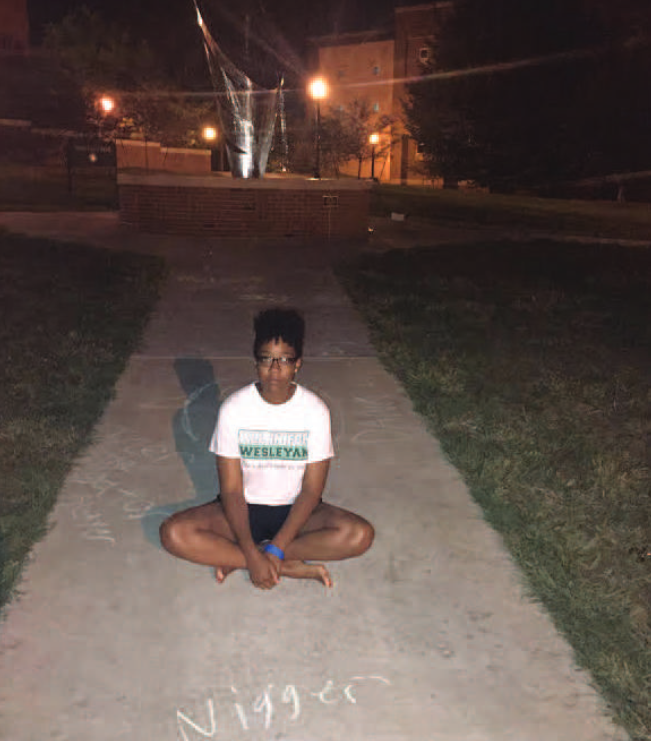 When senior Illinois Wesleyan University student Christy Cole was leaving the Titan Carnival on Aug. 22, 2015, she came across a racial slur chalked on the sidewalk near the new Aspiration fountain.

She decided to post a picture on Facebook of her sitting by the slur along with her thoughts on the incident. “It breaks my heart that in the midst of the positive words and phrases surrounding our new fountain, Aspiration, that someone would write… ‘Nigger,’’ she said.

Instead of being disheartened, she “refuse[d] to be brought down by ignorance,” crafting her post “from a place of compassion.” Cole said that when she saw the slur, she felt a “variety of emotions: anger, pain, discomfort, disappointment,” and even “insecurity.”

She took a moment before writing the Facebook post because she “knew that it was written by a small group of people,” and that it was not the “tone of the entire community.” Due to this, she decided to thank allies instead, and “to remind them to constantly educate people against things like this.”

Cole believes that she did the right thing in addressing this incident from a compassionate standpoint because “love and compassion are always a connection that will be there between human beings, and it is something that everyone can relate to.” Cole went on to express forgiveness towards the perpetrator.

She said that whatever prompted him or her to write the slur “came from a state of ignorance, and ignorance can always be converted into intelligence through education.”

If the perpetrator is revealed, Cole hopes that instead of conventional discipline, he or she be “mandated to engage in conversations about diversity, inclusion and tolerance.” Cole believes that education is key in truly defeating the root cause of racism.

“Incidents like this happen too frequently. In order to decrease them, the university has to provide a significant and bold response. Each time it is met with a strong response, there will be no question as to what social climate exists at IWU,” said Cole.

A day after Cole posted the picture on Facebook, the president of the university, the Provost and the Dean of Student Affairs sent out an email to all Illinois Wesleyan students in response to the incident asking them to “learn more, speak out, and demonstrate [their] commitment to diversity and inclusion.”

In addition to that, the email strongly recommends that Illinois Wesleyan students attend workshops like “3D: Diversity, Dignity and Dialogue” that aim to create a “space for conversation about diversity and inclusion,” as well as chalking the sidewalk by Aspiration with “powerful counter-message[s].”

Currently the Facebook post that started it all over 300 likes and almost 300 shares—an unquestionable sign of Illinois Wesleyan students’ commitment to social justice on IWU’s campus.