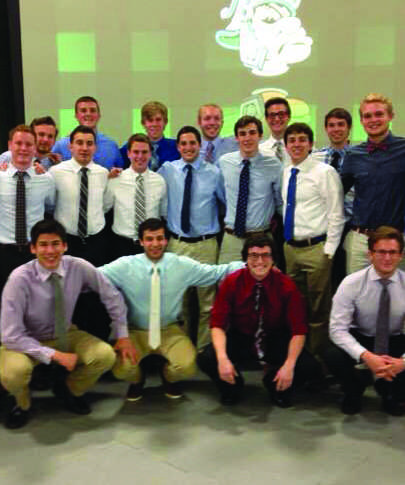 For many, the night was filled with fun and laughter, but also some shades of seriousness which made the ceremony even more special.

Even with many serious moments, the Tommy Awards ceremony was funny as emcee and senior baseball player Matt Hart provided an appropriate balance of humor and sincerity. In total, the SAAC handed out 15 different awards to players, coaches and teams based on certain criteria.

These awards and their winners were

“Do Good Now” Award: Volleyball (the team was given $500 to donate to their charity of choice, which was Special Olympics)

All of these award winners were very deserving and many of them broke school and even conference records. Women’s soccer was especially highlighted throughout the night between nominations and actual awards because of their historic run to the Final 4 this past fall. Not only did they win “Best clutch performance” (Allison Seger), “Coach of the year award” (Dave Barrett) and the “best Game” (vs. Centre College), but sophomore Skyler Tomko also had the second highest G.P.A among all athletes with a 3.95.

Allie Boudreau was nominated for many awards and ended up winning two, “Best Championship Performance” and “Female Athlete of the Year.” She is a member of track in field and won a national title in the pentathlon after two years of being nationally ranked. Many people can attest to her incredible work ethic by the countless hours of her time she puts into training, lifting and trying to become an all-around better athlete.

“It is all about doing the little things to better yourself every single day and having tremendous patience with the process. We live in a society where we want things immediately, but being successful cannot be done that fast, as it takes time. Keeping goals, tracking progress and enjoying every minute of training is what it’s all about,” Boudreau said.

Sophomore Mike Julius is another athlete who stood out to everyone this year at the Tommy Awards. Everyone in the room seemed to have heard of Mike as a fantastic lacrosse player as he won male rookie of the year, but not many knew the other story in his life: after a long battle with cancer, Julius’s mother recently passed away.

For the ceremony, the SAAC team compiled series of video clips which detailed his heartbreaking story. In these clips, coaches, teammates and athletic trainers affirmed his dedication and will power as he did everything he could to persevere.

His ability to push through something horribly sad but continue to be a positive influence on people’s lives and make a huge impact on the field earned him the Fightin’ Titan award. Everyone in the audience was moved by this story, offering Julius a standing ovation when he went up to accept the award.

“It was a great honor to be named the Fightin’ Titan, and when accepting the award it was amazing seeing all the support from the student body. The past year at school has not been the easiest but having friends, family, coaches and my teammates gave me people to lean on when I needed it most. Without them none of my success would have been possible, so thank you to all the amazing people that helped me along my journey” Julius said.