A guide to March Madness for sports haters everywhere 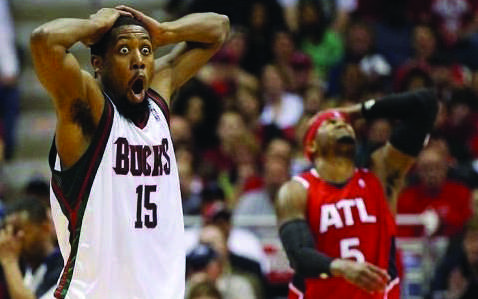 So, it’s the final four and you haven’t paid attention to any of the tournament games. Hell, you probably haven’t held a basketball since Uncle Jerry yelled at you for not being able to make a free throw at the family pickup game in 2008. Nonetheless, everyone is fueled by hate. Here is my personal guide to finding the team you hate the most:

Ugh, Duke. Here we go again. “But Jennick,” your stupid voice will echo. “Duke has such a tradition! Coach K is changing the game!” Barf. Have you ever heard of Krzyzewskiville? It’s where all the Duke students go to camp out before games. Think about sweating your balls off in the North Carolina sun with a bunch of pretentious assholes. Think about losing your virginity at Krzyzewskiville. You’re not-so-planned child will come running up to you with his stupid Duke shirt saying “Daddy, Mommy, where do babies come from?”, and your mug will have to answer “Krzyzewskiville.”

As one IWU student once said “Michigan State: the ugly stepsister of Michigan.” Seriously, when will Tom Izzo stop coaching college basketball and start selling me a used 1984 Buick LeSabre? If you don’t know what that car is, you never grew up poor. Just like Tom Izzo. But seriously, they are the only team in the final four that isn’t a number-one seed. We’re supposed to root for underdog, right? But what if the underdog has a breathing problem, two legs and keeps running into walls like my little chihuahua, Paco? Just like in 300, don’t expect the Spartans to get much further.

They’ve got a lot of heart and are really solid defensively. They have a real chance of making it to the championship.

Kentucky. The Wildcats. “38-0! 38-0! 38-0! We’re all in this together!” At least until the NBA calls. They are about as fun to root for as the runs you get after a whole bucket of Kentucky Fried Chicken. You may say “but they’re actually pretty good.”

So? KFC is pretty good too but that doesn’t mean I have to support them. Just like LeBron James, Tim Tebow and Johnny Football, you’re addicted to Kentucky basketball. Chances are that Charles Barkley can do a better job of pronouncing the players’ names than you can. But you’re a diehard fan from March to March. And because of the fans, I hate Kentucky. Don’t worry if the Wildcats lose, you’ll still have the Miami Heat, the New York Yankees and the Seattle Seahawks bandwagons to jump on.