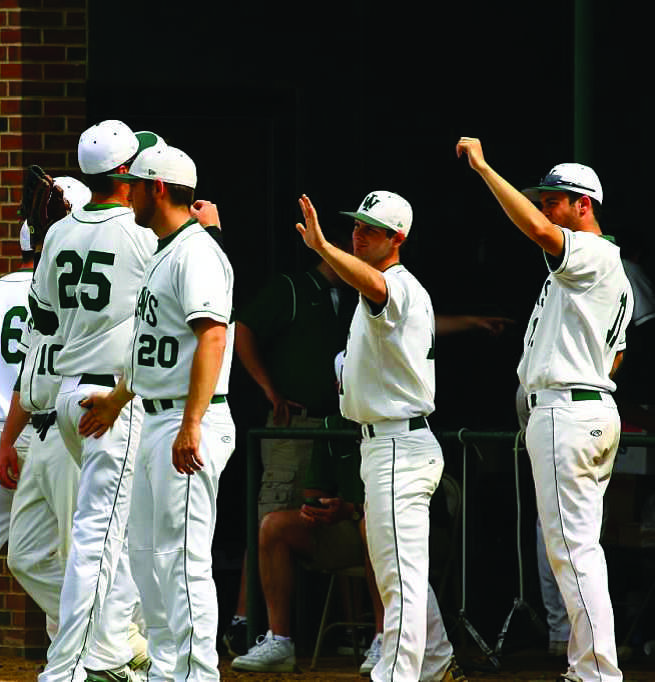 The Illinois Wesleyan University Titans baseball team brought out the brooms on March 28 and 29, starting off their conference season with a three-game sweep of Elmhurst College.

Due to inclement weather, the games were moved from Elmhurst to Bloomington, giving IWU faithful their first chance to see the Titans play at home.  The Titans took game one by a score of 1-0 behind a much-needed performance on the mound from senior pitcher John Munyon.

Munyon (2-1) allowed just four hits and struck out seven batters in seven innings of work.  Senior Dan Truesdale secured the victory for the Titans in the ninth inning with his fourth save on the year.  First-year third baseman Gino Cavalieri’s single in the fifth inning proved to be the only RBI they would need.

The Titan bats came alive in the second contest as they took down the Blue Jays in fashionable style 9-5.  Cavalieri and sophomore catcher Pat Mollo led the way with three hits each.

Mollo continued his recent hot streak, smashing a solo home run in the sixth to give him a team leading four home runs on the year. Mollo is batting .345 on the year, with 20 hits and eighth doubles for the 11-4 Titans.

“I’ve been seeing the ball well lately and going up to the plate with confidence every time. Junior Matthew Mardis and seniors Derek Idstein, Tim Coonan and Jarrod Juskiwicz have really paved the way behind the plate so far and set the bar high,” Mollo said.

Indeed, these four have played an integral part in the Titan offensive attack, accounting for a combined 84 hits in only 15 games.  Junior Matthew Mardis is playing like an All-American, hitting .460 with 11 RBI’s and a team-leading 23 hits.

The Titans improved to 11-4 on Sunday with a 17-7 win to send the Blue Jays home on the ultimate low note. Idstein, Coonan, Mardis and Juskiewicz continued to impress with two hits apiece.

Idstein and Juskiewicz had a pair of doubles while Mollo went yard (solo home run) for the second time in one weekend.  A tough start for transfer pitcher Josh Jimenez required assistance from the bullpen, and the Titans’ relievers answered the call.

“A lot of credit is given to our strong performance behind the plate this year, but I think people also need to recognize how good our pitchers have been.  It’s a next guy in mentality for us on the mound, and we’ve had a lot of people step up in big time moments,” said senior Derek Idstein.

The Titans have a lot to be proud of after such a promising start to the season, but also must realize there is a lot left to be accomplished.   They have proven how much talent they possess. Now it comes down to consistency and execution.

IWU will continue CCIW play on Tuesday, March 31 with a 3:00 p.m. doubleheader in Chicago, Ill against the Vikings of North Park.