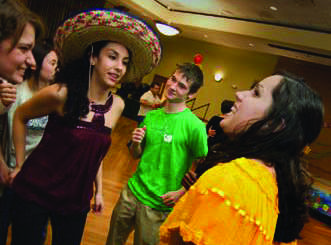 On Friday, Feb. 2, the Illinois Wesleyan Spanish and Latino Student Association (SALSA) hosted the annual Barrio Fiesta in the Young Main Lounge, which was decorated for the occasion.  The entry had a yellow and blue balloon arch, and the tablecloths matched colors with the national flags adorning the walls.

“The Barrio Fiesta is our annual cultural showcase.  This year, we are highlighting the cultures of Costa Rica, Bolivia, Paraguay, and the Dominican Republic,” says SALSA Vice President Yolanda Juarez ‘17.  “We do that through food, dance and trivia.  We want to show people that Latin culture is not just limited to the countries that everyone thinks of.”

Info cards with facts about the various countries had been placed on the tables to educate the guests on the culture, currency and government of the featured countries.

Many students look forward to the annual Barrio Fiesta because of the wonderful free food, and this year was no exception.  The main dish served was Bolivian Guiso de Carne, or beef stew, served with a side of Dominican rice and beans. There was a special surprise drink: Dominican morir soñando, which literally translates to “dying whilst dreaming.”

“I picked out the drink morir soñando for the event,” senior and SALSA secretary Crystal Ocampo said.  “The name is so interesting, and I thought it would be a good way to introduce people to something new.  I don’t want to reveal the ingredients, though, because I’m afraid it will make people not want to try it.  But, trust me, it’s fabulous!”

The programming began with a poem from Kathy Serrano ’16, who recited “Of America I Am,” about the beauty and variety of Latin American culture, both in English and in Spanish.  This was followed by a group dance, the Bachata, which is partner dance originating in the Dominican Republic. The dance was done to lively music, and emphasized fast footwork.

The night continued with another poem, read this time by Crystal Ocampo.  She read Quièn fuera tu espejo by Fabio Fiallo, in English and Spanish.  The final dance was titled “The Women Dance it Best,” but began with a group of men who believed that they could perhaps dance it better.  They were promptly moved out of the way, and the ladies took over for the remainder of the dance.

Throughout the event, the SALSA members presented trivia questions to the attendees, with IWU key chains and stickers as prizes to those who answered first.

The event also had a somber note, as a moment of silence was observed to honor the victims of 2014 Iguala mass kidnapping in Mexico, where 43 male students were kidnapped, and six were killed.

To round out the event, members of SALSA taught everyone how to dance the Bachata and the Merengue.  Everyone got out of their seats and had a great time participating in the event.  The dancing continued into the night.

Overall, Barrio Fiesta 2015 was an amazing campus cultural event, in line with all of the other amazing cultural events that happen at IWU throughout the year.