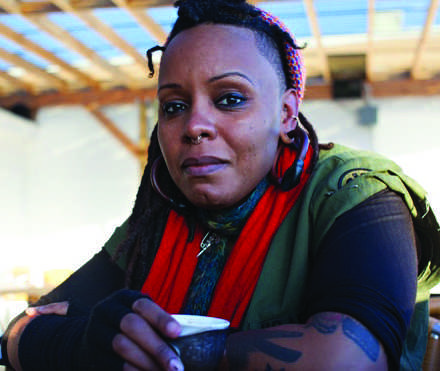 Photograph: Tim Knox for the Gua

When you hear the characteristic human-like wail of a saxophone, the sound of jazz usually isn’t far off. Since the birth of jazz in the late 19th century, the saxophone has been almost synonymous with the genre of music, and in no other genre has the saxophone experienced such spotlight.

Matana Roberts is one such saxophonist who has been turning the genre of jazz on its head as of late. Her new record, Coin Coin Chapter Three: River Run Thee is the latest installment in a series of 12 albums that she is in the process of writing, examining slavery and the mistreatment of the black people over the course of the past centuries.

The first two albums had Roberts employing both a large band of jazz musicians and a smaller ensemble. This new album has Roberts taking a completely different and alien direction from anything she’s ever done. In this album, she takes a completely solo approach, much like a singer songwriter, using only her voice, her saxophone and wide array of loops and gadgetry.

Like famous trumpeter Wynton Marsalis, Roberts looks to America’s dark past for the subject of her work. This album rejects almost every conventional rule of traditional jazz, eschewing normal harmonies in favor of a more hallucinatory, psychedelic approach to rhythm and melody.

That being said, this isn’t your typical acid freak out session. Roberts layers her voice speaking various stories about potentially fictional, potentially factual accounts of slavery as the musical backdrop.

It’s never really revealed where these stories come from or whether or not they have any historical basis, but they give the record an eerie sense of mystery, a constantly shifting canvas over which Roberts intones her plaintive chants.

This kind of melodic language gives the record a completely different feel than Roberts’ previous work, taking on a ghostly, ethereal quality that provides her words with a lot of haunting power. Roberts’ voice takes the main focal point, as the lyrics and stories seem to provide the album with most of its emotional weight.

When the saxophone rears its head in the mix, it sounds twisted and distant, like the cries of those who never had their fair share of happiness in this short lived and dark world. Since the saxophone is one of the closest instruments to the human voice, it functions less as an accompaniment instrument and more like another voice in her bleak narrative.

This is an album about voices in both in its conceptual content and also in its musical composition. Roberts uses various forms of electronics, loops and samples, to give the record a lot of its unknown and creepy timbres. Even though Roberts uses these contemporary means for her ends, it doesn’t ever feel like a gimmick, and this record is very much an emotional and intense affair.

The tracks themselves aren’t necessarily important because each one fades into the next, and it serves more as the one complete soundscape. In this sense, it doesn’t make much sense to listen to the album track by track, because you won’t get the whole effect. In this case, it would make more sense to digest the album in one sitting.

Regardless, this album shows Roberts at the top of her game, and to listen to it would be a glance into the sonic world of one of jazz’s most forward-thinking artists in these musically congested times.

Her forward-thinking abilities not only create a top-notch jazz album, but they also tell a story that all of us can learn from.