IWU: Get up to date with Modern Baseball 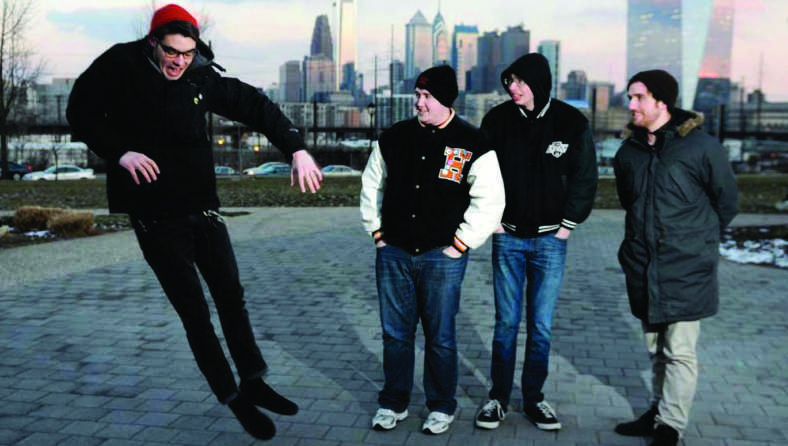 Pennsylvania indie rock group Modern Baseball visited Bloomington’s Castle Theatre on October 1. I had the privilege of interviewing them before they started their show.

Zane: So how did you guys meet?

Modern Baseball (MB): Well Brendan and Jake, who are our two singers, met in high school, and they started recording songs together and started the group Modern Baseball. Then they moved to Philly for college where they met me and Ian.

Z: You guys just got back from touring in the U.K. What was that like?

MB: It was a fun tour, we toured with our new friends in Spraynard who are from the same area of Pennsylvania as we are, but we had never really hung out or knew them that well.  We shared the band, got real close, they became some of our best friends and then we traveled the U.K. with them.  This was the first time Modern Baseball did Ireland and we did Barcelona as well, and all the shows were awesome.

Z: Did you have much time to catch your breath and check out the local areas?

MB: In Barcelona we went to the beach, but we didn’t get to go around as much as when we first toured the U.K.  We didn’t have as much time because we were kinda “jetsetting” around a bunch, but we got to hang out in some chill spots.

MB: Riotfest was insane. I mean, we can say now that we played the same festival as Weezer, The Cure, and Slayer, so that was pretty sick.  But our set was just incredible, one of my favorite if not my favorite Modern Baseball set that we’ve played so far.

Z:  Was that your favorite venue?

MB: I think that me and Ian’s favorite is Asbury Lanes in Asbury Park, New Jersey.  Nothing beats it. First Unitarian Church in Philadelphia comes close, but we’re from New Jersey so nothing can really compare.

Z:  How do you guys think that the band evolved from the first album “Sports” to your current album “You’re Gonna Miss It All”?

MB: There’s definitely growth in songwriting in Jake and Brendan’s songs. I feel like they’ve matured a little bit.  Just songwriting-wise, there’s a little more structure and build-up and the whole process was just different.  Rather than recording it practically overnight, we would record it over a month, three nights a week just go in from 11-8, well from 11:00 p.m. to 8:00 in the morning we actually booked up three and a half weeks.  And also, technically “You’re Gonna Miss It All” was the first release that Sean and I have played on because the first one we weren’t really in the band yet; we were when it was released but not when it was being recorded.

Z: In an E Weekly article, your band was dubbed “Emo Revivalists.”  What would you say about that label?

MB: Yeah, it’s not something that we set out to do, but we kinda just got roped up into it.  And I mean its fine, it’s cool wherever you want to put us, obviously we hang in a lot of different genres.  We do punk tours, we do pop-punk tours, so I think the label is just one way to expose new kids to our music…and in the end it’s just a word (laughs).

Z: Lyrically, you guys are funny, clever and angsty all at the same time.  Who takes credit for the songwriting, or is it more of a group process?

MB: Jake and Brendan will individually write songs, and then once they demo it out they bring it to the band.

Z: What does the future hold for Modern Baseball?

MB: Well, we just announced that we are doing a full US headliner tour with Knuckle Puck, Somos, and Crying, and then on various parts of the tour our friends Walter Mitty, Hostage Calm and Foxing will be there as well, so it’s going to be a lot of fun (laughs).