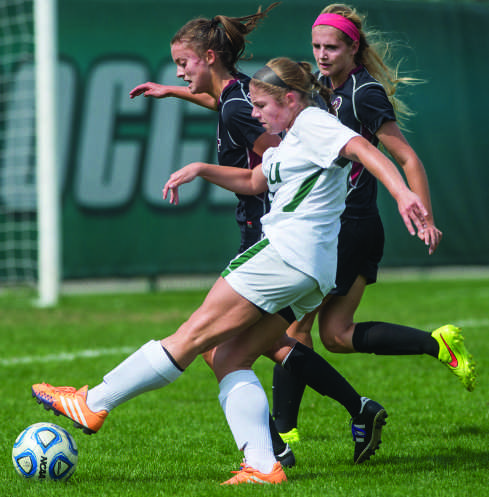 It’s a mistake to try to label the Illinois Wesleyan University women’s soccer team. Every week I’ve tried, they find a different, previously unused trick in their arsenal to come away with a win. Last week’s was resiliency— this week’s is diversity. This week, the team rode the lone goal of first-year Cassandra Leishman to defeat the #7 ranked University of Chicago.

Fun fact: the team has had 12 different goal-scorers for them this season. Week after week, the team has foiled opposing game plans, communally shouldering the goal-scoring load. Whenever a team commits themselves to stopping one of the team’s better-known players— perhaps the sophomore leading goal-scorer Skyler Tomko or key distributors like senior Julie Govedarica— other Titans are ready to answer the call. Last week, the team was powered by goals from senior Tess Bottorff, Govedarica and Tomko.

This week, it was first-year Cassandra Leishmann, who said “I think that the diversity on the team with 11 different scorers just shows how much talent is on the team this year. The bench has a lot of depth with girls that all have different strengths that can impact the game in positive ways!”

Her goal happened early, putting the University of Chicago behind the 8-ball in only the eighth minute of the game. The Titans built their attack up the right side of the field, with junior midfielder Jenna Baker being the play’s catalyst. After finding just enough space along the end line, Baker threaded a driven cross across the goalmouth and Leishmann was there to put it away.

“I just thought to myself, don’t mess up. Keep the ball low. The next thing I knew, my team was surrounding me with hugs and congratulations. I wish I had a fun celebration, but I was too in shock,” she said.

The goal is her second of the year, but Leishmann is not starting to take any goals for granted. “Scoring hasn’t been a norm for me in the past as I’ve mainly played defense my whole life. I’m pretty excited to get one against a good University of Chicago team.”

Because of the diversity and depth of this Titans team, the fact that their leading goal scorers were kept off the scoreboard wasn’t a concern. The team found a way to win, knowing they have players capable of delivering in key moments. Leishmann rewarded them for their trust.

After taking home the win in their last game before conference play, the team looks ahead to their date with long-time foe Augustana. With over a week of preparation for their first conference matchup, the team has a pretty good idea of what they must do to win. It starts with staying true to their identity.

The team’s seniors have set the tone and created a culture, and as senior Julie Govedarica said, “We don’t tolerate laziness and we hold people accountable for their actions, all while maintaining a fun and competitive environment. We have made sure the team has a strong relationship on and off the field. Bringing home the W pretty much goes without saying on our priority list. We encourage the team to build on each game and not to look past any team we play.”

“What we have to do is stay composed, have fun, work hard, and put the ball in the net,” said Leishmann.

The team has certainly done that this year, and in their moments of composure, they have established themselves as a power figure in the CCIW. The team is on a roll, and they’re confident without being cocky. Tomorrow’s 1:00 p.m. game at Augustana should be a good one.